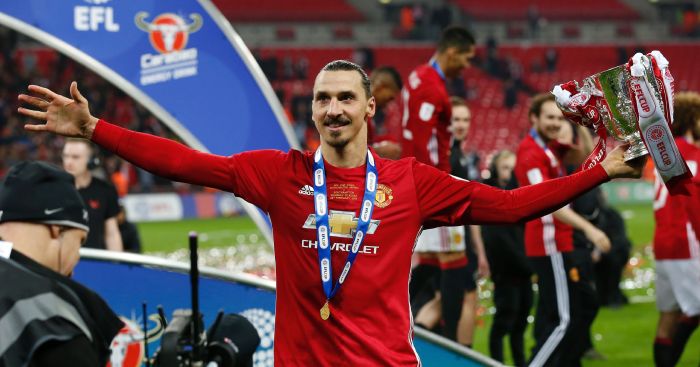 Asking the big questions
From MailOnline: ‘Paul Pogba celebrates Manchester United’s EFL Cup win with dinner at Novikov… But what was he wearing on his feet?’

Decision time
Zlatan Ibrahimovic made the difference on Sunday as a poor Manchester United side lost to an excellent Southampton but, well, calm your jets a bit people. This is from Martin Samuel in the Daily Mail:

‘It is more than just his 26 goals. It is occasions like this when Ibrahimovic commands the stage like only a giant can. It does not matter how well his team are playing. It is irrelevant who deserves what. Zlatan decides.

‘Yesterday he decided the first trophy of the season should go to United.’

Simple as that. Now if only he had decided that Manchester United would beat Manchester City, Watford, Stoke, Liverpool, Chelsea, Burnley, Arsenal, West Ham, Everton, Liverpool (again), Stoke (again) and Hull, then perhaps they would be somewhere other than sixth in the Premier League.

Share the joy
Here is more from Martin Samuel, who admits ‘it would be harsh to make it so much about one man when Southampton were a huge part of the game’ in the tenth paragraph of a match report hitherto dominated by one man, including this:

‘It was noticeable when Jesse Lingard scored United’s second – another beauty, by the way, he immediately shared the joy with Ibrahimovic.’

…and see Lingard running straight past Ibrahimovic, who eventually catches him and hugs both Lingard and Antonio Valencia at the same time.

Either works. Whatever Zlatan decides, really.

The daily special
‘Rooney is no longer special, that much has been apparent for the past year,’ wrote Dave Kidd in the Mirror in September.

So why, in February, was the Chief Sports Writer of Britain’s biggest-selling newspaper (for he is now back at The Sun) writing his EFL Final piece on a player who did not kick a ball? Not ‘special’ but still the story, it seems.

And no, we haven’t forgotten that you followed that sentence about Rooney in September with this one: ‘The more pertinent question for Manchester United is whether there is anything special about Jose Mourinho any more?’

Which we think you answer yourself in February when you gushingly write that winning the League Cup ‘leaves him in the company of giants’, insisting that ‘Mourinho knows full well that he stands alongside’ Sir Alex Ferguson, Brian Clough and Bob Paisley.

Special enough for you?

Heard the one about an Englishman, a Scotsman and a Swissman?
Graeme Souness on Englishman Dele Alli and his nasty streak, February 26: ‘Alli has a bit of devil in him, an edge that most top players possess. As strange as it sounds, if I was his manager, I’d be quietly saying to myself: “Thank goodness he’s got that in him.”

‘I’ve only seen Alli’s challenge once but it was a throwback to my own playing days, one you see less and less now. The ball got away from him and he thought: ‘Have some of that because the game’s not going my way.”

Graeme Souness on Swissman Granit Xhaka and his nasty streak, January 25:  “What isn’t registering with him? He’s obviously got the exploding head.

“I don’t look at him and think, ‘you’re an aggressive player’. It’s a lapse in concentration and he’ll be annoyed he gave the ball away so cheaply. For me, he doesn’t run around making aggressive challenges. He is the run of mill midfield player for me. He must have something in him where it goes.”

Colour me shocked
Mark Hughes ahead of Stoke’s Sunday clash with Tottenham after being reminded that they lost their last meeting 4-0: “We have improved markedly since that game. I would be very surprised if the result was the same.”

Mind you, you cannot blame a man for being fooled by wins over Sunderland (twice), Mike Phelan’s Hull, Bob Bradley’s Swansea, Burnley (at home) Watford (twice) and Crystal Palace.

Imagine how convinced he would be of improvement if they managed to beat a single team from the top half of the Premier League.

Merson and Marco Silva: A slight return
Presumably, six weeks is enough for him to “know the league”. He’s practically English now…

Bully boy
Mind you, despite being impressed with Marco Silva now he has actually heard of him, Paul Merson still told Sky Sports: “The only man I think can come in and take this job is the man they sacked last time and that’s Pearson.

“He’s the only one who can come in and start getting these by the throat, up against the wall.”

How bizarre that these sophisticated tactics did not inspire Derby, who parted company with Pearson in 20th position in the Championship.

It’s Monday and they’re still outraged
‘It is hard to imagine a more pathetic, dispiriting, thoroughly depressing decision has ever been made,’ wrote Martin Samuel on Friday. We have one: The decision to basically write the same column again in Monday’s Daily Mail.

‘HERE is the problem with Leicester: the greatest day in the history of the club has almost certainly gone.’

And if that’s the problem with Leicester, then it is also the problem with Aston Villa, West Ham, Huddersfield Town, Preston, Norwich, Wolves, Bolton, Blackpool, Nottingham Forest and roughly half the other clubs in the Football League. And they can all find managers.

‘What could Roberto Mancini, or any successor to Claudio Ranieri, achieve that would match the euphoria of last year?’

Well, nothing. But any successor to Claudio Ranieri would not be required to match that euphoria; they would simply be required to keep Leicester in the Premier League.

‘There will be a praise if a new manager keeps them up – although Leicester were not in the bottom three at any time this season, before sacking Ranieri – but how can it match the achievement of winning the league?’

And no, keeping them in the Premier League will not ‘match the achievement of winning the league’ but David Wagner is a hero at Huddersfield despite not being able to deliver three championships in a row and Simon Grayson seems quite well-regarded at Preston despite it seeming unlikely he will win back-to-back titles.

If a new Leicester manager keeps them in the Premier League and then establishes them as a mid-table side then he will have done his job; people are largely able to judge two different people in two different circumstances without bursting a blood vessel in outrage.

We will not waste much more time on Samuel except to fast-forward to his very last lines:

‘There are clubs out there who still have it all to do. Leicester did it and weren’t satisfied. If the greatest year in English football history was not enough, how can Leicester’s new manager impress?’

Let’s keep this simple: They were satisfied. It was enough. They just didn’t want to go down.