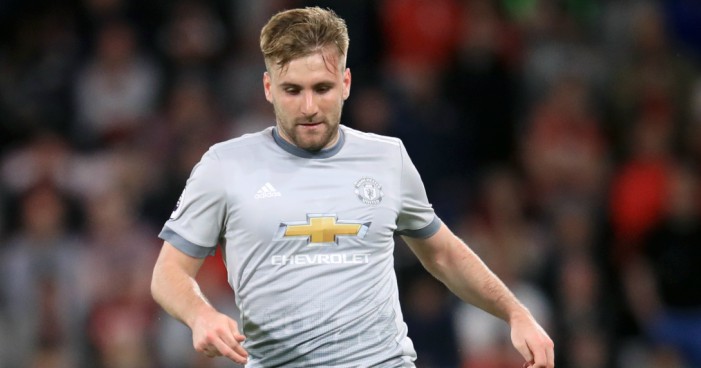 If you look at the above picture and think ‘you fat b***ard, get yourself a bigger shirt’ then you are either a much thinner man/woman than Mediawatch or you are the Daily Mirror’s John Cross, who has himself been occasionally prone to lovable chub.

Cross writes in his match report from the Vitality Stadium that ‘no one could miss Luke Shaw, looking heavier than ever and in need of a bigger shirt’. He adds ‘surprisingly, he played well at left-back’ as though Shaw is just so ridiculously fat that he could not possibly do more than drag his massive bulk around the pitch.

And in case you missed it, Cross then adds in his match ratings: ‘Sorry, but he’s got to find himself an XL shirt like the rest of us. OK.’

2018: When fat-shaming footballers in national newspapers passes for football journalism.

2018: When Mediawatch wishes it were as fat as Luke Shaw.

Diss appear
When Paul Pogba was substituted by Jose Mourinho in the 80th minute in Bournemouth, he applauded him. After the game the Manchester United manager told the assembled press that Pogba had put in a “top performance” and agreed with BT Sport’s choice of the Frenchman as man of the match.

So imagine Mediawatch’s surprise to find that the pair had had both a ‘frosty non-exchange’ (Mirror) and an ‘awkward exchange’ (Mail). Can you have both a non-exchange and an exchange? Apparently you can.

The Sun have also carried the ‘story’ but have opted for that timeless classic of online journalism: ‘PAUL POGBA appeared to give Jose Mourinho the cold shoulder after being replaced at Bournemouth.’

In case you have not seen the glossary, ‘appeared to’ basically means ‘we have seen a picture and we really have no clue what is happening but we are happy to speculate in pursuit of delicious clicks’.

They appear to be absolute <REDACTED>.

The Equaliser
‘THEY are known as Ed Woodward’s dead wood…’

We shall stop you there, Andrew Dillon of The Sun, because they absolutely are not. You have made that up. And who can blame you? You are, after all, the hilarious brains behind the ‘A View to a Dill’ column. You have earned the right to be a little economical with the truth in pursuit of a good intro.

What you haven’t earned, mind you, is the right to lump Marouane Fellaini in with the rest of the ‘unwantables’; making him two contract offers doesn’t sound like the kind of thing Manchester United would do with a man they don’t actually want. Unless it is a truly elaborate game of bluff.

Where there’s a Wil
John Cross, Daily Mirror, March 14: ‘Everton are ready to make Jack Wilshere a big money offer to join them this summer.’

John Cross, Daily Mirror, March 21: ‘Jack Wilshere fears he will have to quit Arsenal this summer…Wilshere has already received offers from Everton and Italian duo Juventus and AC Milan. It is believed Liverpool and Manchester City are watching developments, too.’

John Cross, Daily Mirror, March 26: ‘Arsene Wenger has insisted he does want Jack Wilshere to stay at Arsenal – and is putting his full “weight” behind keeping him…Everton have offered Wilshere a mega deal while Juventus and AC Milan are keen and Manchester City and Liverpool are watching developments.’

John Cross, Daily Mirror, April 19: ‘Ambitious Wolves are ready to make a move for Jack Wilshere…They face major competition for England international Wilshere – he’s already had a huge offer from Everton while Liverpool and Manchester City continue to watch developments. It is understood the best offers could come from abroad with Italian pair Juventus and AC Milan interested.’

Anybody have any clue who (John Cross wants you to think) is watching developments?

Most surprising line of the day
In Paul Jiggins’ surprisingly caustic piece about Harry Kane in The Sun after quoting the England striker saying he is unaffected by criticism:

‘Well somebody had better tell his face then because he walked away from Tottenham’s last two matches with the expression of a fella who had just discovered someone has crapped in his kettle.’

Jeez. You can take the man out of Millwall but…

We (exclusively) see pictures of seven Arsenal players but are told by The Sun that ’19 first-team players were present for the evening ahead of Sunday’s West Ham clash – with Arsenal languishing in sixth in the Premier League’.

The Daily Mirror website have seen this story and decided it is literally the biggest thing in football. But what they can’t prove is how many players were at the casino, for they too have pictures of only seven. So…

‘As many as 19 first-teamers visited London’s Barracuda Casino with the Gunners stars congregating in a private room.’

Colour me shocked
The word ‘shock’ or ‘shocking’ appears 20 times on the Express football homepage. We suggest we adjust their expectation levels a touch; it cannot be healthy to be forever on the verge of being shocked.

EXPOSED and a ‘shocking’. What the hell could it be?

Thankfully the Express provide a clue in the opening line: ‘MANCHESTER UNITED star Paul Pogba is just the latest on a list of players that have fallen out with Jose Mourinho over the years.’

So it’s about Pogba? Well it must be because there is no way they have thrown in the name of Pogba just for clicks.

Spoiler alert: It’s the story of a text sent in 2013 when Mourinho was not even Real Madrid manager, never mind Manchester United manager.

The only thing that’s been EXPOSED is the capacity of EXPRESS Sport for sh*te.

Rob Smyth on Wenger vs Fergie.