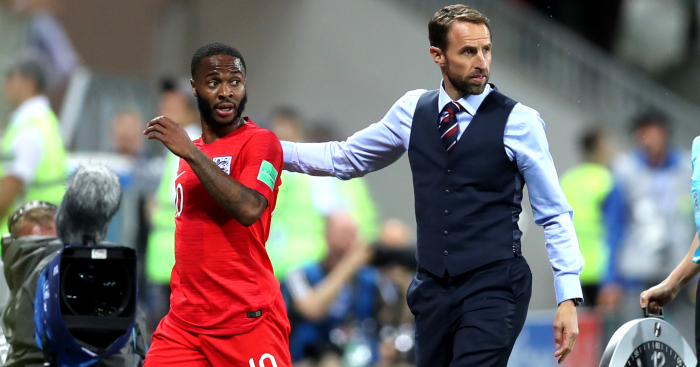 The big story of the night
One of the most testing aspects of being a football journalist is submitting copy so soon after a final whistle, with extra-time and penalties making that job even harder. Writers must choose their tack, hopefully having time to add an introduction and conclusion that captures the mood. That is our slight defence of the Daily Mail’s Matt Lawton.

And that is where that defence ends, for Mediawatch cannot fathom quite what possessed Lawton to write a derogatory piece on Raheem Sterling during the magical events of Tuesday evening. England had just won a bloody penalty shootout at the World Cup for the first time in their history, for goodness sake.

Having tweeted the piece, deleted the tweet and then seen Mail Sport delete their own tweet plugging the piece, Lawton knew something had gone badly wrong. It is not unusual for a column to be altered for a paper’s second edition, but Lawton’s was completely rewritten.

Click on the link that reads ‘Raheem Sterling threatened Colombia but was the source of frustration’ – the source, not a – now and you reach a piece headlined ‘Gareth Southgate screamed towards the night sky… the psychometric tests, daily rehearsals and meticulous penalty planning gloriously paid off’. Sterling is mentioned in only one paragraph of this new piece, but was mentioned or referenced in almost every paragraph of the original piece. That is some Grade A reversing.

The shock here – given his tweet later that evening – is that Lawton was surprised by the angry reaction. Sending abuse to journalists is a fool’s game, but after all the recent tabloid coverage of Sterling, did he really think that a Chief Sports Reporter leading on this angle at a time of triumph would be a good idea? Is he really that tone deaf?

There’s an argument too that the piece didn’t really stack up at all. Sterling found pockets of space in the first half, and helps to drag out defenders in this formation. Lawton’s own paper picked out Ashley Young and Kyle Walker as worse performers, and rated two other players the same; the Daily Mirror rated only one player higher. Southgate has repeatedly said that he doesn’t know what the fuss is about because Sterling works in this system. So why an entire piece based on him not scoring?

This was simply a dreadful journalistic call. And then a dreadful editorial call to sell the piece in such an inflammatory manner on the website. Given the vast array of story-lines emanating from Tuesday evening’s match, Lawton and the Mail chose completely the wrong one. If the angry reaction went too far, it is at least pleasing to see England players being staunchly defended by supporters. They are guiding the mood on this one.

Don’t know much about history

‘It’s the headline we have waited a lifetime to write: England win on penalties.’

No quarter given or asked
This might be the last time that Mediawatch reminds you of Neil Ashton’s pre-tournament misery in The Sun, truly earning his nickname as Chief Grumpypants II. But here – from October 2017 – goes:

‘TRY picking an England team from the list of 22 stellar names Glenn Hoddle had for the 1998 World Cup.

‘There was competition in every area of the pitch when the team was selected for the opener against Tunisia.

‘Alan Shearer went into the 1998 World Cup having been the most expensive player in the world. Neville or Southgate, Adams or Campbell, Beckham or Merson, Batty or Ince, Shearer or Sheringham, Owen or Ferdinand. They were hungry young men at the top of their game.

‘Twenty years on, with England’s Group G opener against Tunisia just 90 days away, Gareth Southgate has some very different dilemmas. Hart or Butland, Rose or Bertrand, Mawson or Maguire, Henderson or Livermore, Vardy or Welbeck.

‘The World Cup, yet another World Cup, is about to pass England by. This is one of leanest England squads in living memory, light on genuine world-class footballers and well short of the quality needed to go deep into a World Cup.’

A reminder on this glorious Wednesday: This England team has now gone deeper into the World Cup than the feted class of 1998.

‘At every turn, there was a top-quality replacement waiting for a chance.

‘That group, a pre-cursor to a golden generation of players who failed to go beyond the quarter-finals in 2002 and 2006, represented English football’s elite clubs.

‘The squad training at St George’s Park to prepare for prestige friendlies against Holland and Italy has a very different feel to it.

‘Beyond the four players each from Tottenham and Liverpool, plus three from Manchester United and City and two from Arsenal, the rest are playing for mid-table sides.

‘In the coming years, Leicester, Burnley, Stoke and Bournemouth will get used to sending away their English players during international years.’

No. of starters from Tottenham, Liverpool, Manchester United and Manchester City for England on Tuesday: Nine.

No. of starters from Leicester, Burnley, Stoke and Bournemouth on Tuesday: One.

And by God we’re glad Harry Maguire was there.

Option 1: The Sun are starring out the word ‘balls’, which seems a touch sensitive. We think we can cope, guys.

Introspection
‘The whole world is rolling around on the floor and laughing at great actor Neymar’ – Daily Mirror.

Let’s not talk about Jordan Henderson and Maguire, eh.

On the same page
‘He doesn’t make a song and dance about things – that’s why Kieran Trippier gets overlooked. But he’s been a revelation in this campaign and last night was no different. He’s the best England deliverer of a dead ball since David Beckham’ – Ian Herbert, Daily Mail.

‘Got forward well but tended to panic at some of his set pieces’ – Jamie Redknapp, Daily Mail.

The power of football
‘I do not want to be English – and any attempt to create an English identity will fail’ – Paul Mason, Guardian, May 2015.

‘I still don’t want to be English…but I do want regional federation to succeed UK’ – Paul Mason, Guardian, May 2017.

No country for old men?
Writes Mike Keegan in the Daily Mail, on Wayne Rooney’s move to the US:

‘At some point, Wayne Rooney will realise that MLS is a different ball game from what he has been used to as he adjusts to life in the US capital following his move from Everton. It may have already happened.

‘Certainly, if Rooney has spoken to old friend Steven Gerrard about what lies ahead, he should have a clear picture that this is not going to be a walk in the park.

‘Yes, MLS may not be as technically advanced as Europe’s big leagues, but it is a gruelling, demanding competition. Some would say it is no country for old men.’

Some might, but they would be pushing it. Keegan is right that some of the snarky things said and written about MLS are unfair, but here are the most recent MLS Player of the Year winners:

Mahrez was PFA POTY and the star of Leicester's title triumph in 2016.
Coutinho was Player of the Month in Feb 15. #mcfc are getting a bargainhttps://t.co/Ec1ClWZxme

And Coutinho had far longer left on his contract, was two years younger and was being sold by a financially elite club, hence the difference in fees.

It’s almost like this bizarre stoking of rivalries in a supposedly serious publication has no basis in fact.

Story of the day
‘The best moments between press and players are always the impromptu ones rather than the FA’s stage-managed World Cup events.

‘One of the former occurred when a football journalist was FaceTiming his 11-year-old son outside England’s media centre, and saw Dele Alli go past. As the boy is a big fan of the Spurs player, the reporter asked Dele whether he would say hello.

‘Not only did he do that but then spent some time talking to the youngster about their mutual love of the popular computer game Fortnite’ – Charlie Sale, Daily Mail.

Love him. Love this team.

Recommended reading of the day
Jonathan Liew on England.