Home Mediawatch Ole out, everybody out, Harlem Globetrotters & gender-neutral boots 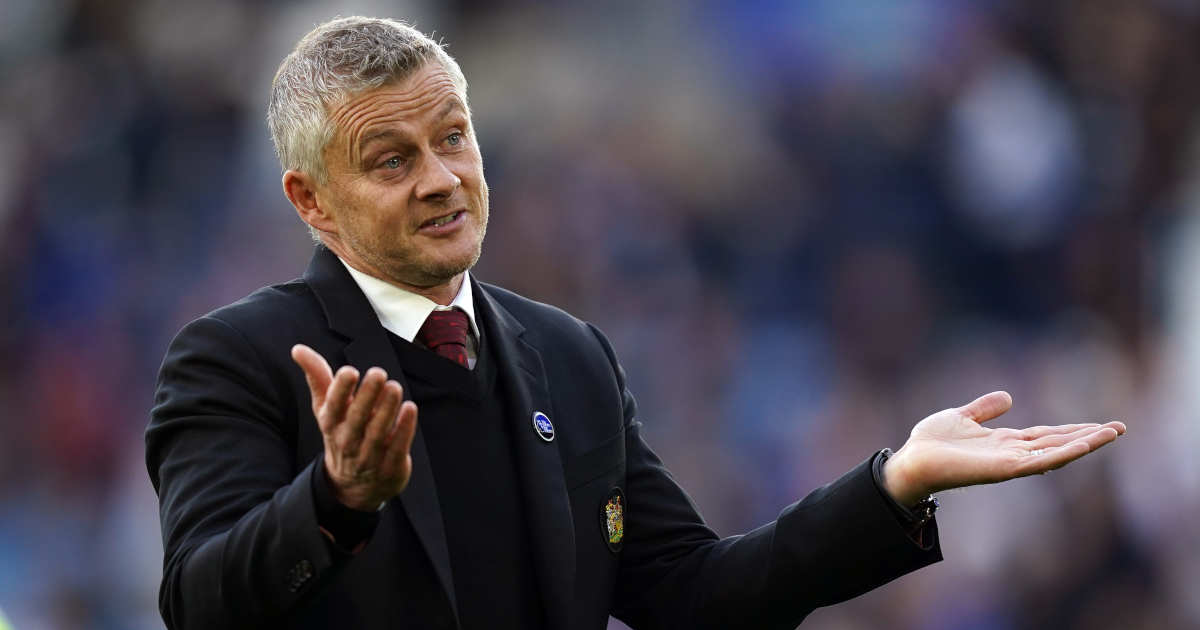 With no-one seeming to know whether Ole Gunnar Solskjaer will still be in a job by the weekend, it’s still hot-take open season in this morning’s tabloids.

Ian Ladyman – Manchester United Manager
Another day, another round of swirling rumours concerning ‘Wally’ Gunnar Solskjaer. Nature abhors a vaccuum, and in the absence of anything solid on the future of the Manchester United manager something strange is happening to the writers who wrap themselves in the goings-on at Old Trafford. In The Daily Mail, Ian Ladyman is on hand with a hot take that is sure to grab some attention: ‘If Ole makes it to the Spurs match, he has to be brave and drop Ronaldo and Bruno Fernandes: PORTUGUESE PAIR MUST MAY THE PRICE’. (Their capitals.)

Ladyman has plans for United’s next match at Spurs. In fact, he might even be pitching to replace Ole at Old Trafford for their upcoming game against Spurs. He’s helpfully listed the team that he believes should start this match, and yes indeed, there’s no place for either Bruno Fernandes or Cristiano Ronaldo. Never mind that few United supporters would place the blame for their sluggish form so far this season on these two players. Never mind that, between them, they’ve scored almost half (10 out of 22, to be precise) of United’s goals so far this season.

According to Ladyman, ‘if you are going to place more emphasis on solidity — pick a team that will not be so readily ripped open — then a centre forward such as Edinson Cavani will at least enable you to stretch play and present a target for the ball when you do get it’. It’s probably worth pointing out at this point that Spurs couldn’t manage a shot on goal for the entire second half of their last game against West Ham United, so if there’s a team that you probably can afford a little less ‘solidity’ against, it’s probably them.

Ladyman opts for a 4-3-2-1 formation, with a three man central midfield of Nemanja Matic, Scott McTominay and Fred (Nuno quaking intensifies), behind Marcus Rashford and Mason Greenwood, and with, umm, no changes whatsoever made to the defence that shipped five goals at home to Liverpool.

Earlier in the piece, Ladyman reminded us that, ‘What is it they say about the definition of madness? Something about doing the same thing over and over whilst expecting a different outcome.’ Well, replacing the forward players who’ve scored almost half of their goals but leaving the defence completely untouched may well end up with a different outcome, but Mediawatch isn’t certain that it would be a very positive one for Ole.

YouTube commenters & ‘Man Utd fans’ are not the same thing
Meanwhile in The Daily Star, there’s an #engagement double-whammy on Cristiano Ronaldo to ‘enjoy’. On the one hand, ‘Cristiano Ronaldo [is] ‘becoming irritated’ with Man Utd star over key decisions’, which is a report about a report on ESPN which hints that Ronaldo and Mason Greenwood are barely linking up on the pitch, while on the other, ‘Man Utd fans think Ronaldo was ‘mocking’ Solskjaer after Liverpool goal’.

But the latter of these two stories isn’t as straightforward as some United fans on social media or a forum chatting. A little digging reveals to be the comments from underneath a YouTube video of it so, in other words, there’s nothing to suggest that any of the comments made are even from ‘Man Utd fans’. They’re from YouTube users, and that’s not necessarily the same thing, no matter how much attention United pay to their social media #numbers, these days.

Will someone please check that Neil Custis is okay?
Neil Custis returns to the subject of Manchester United and Ole this morning in his column in The Sun this morning, and it’s not an especially dignified read.

‘NEVER in 22 years of covering Manchester United have I witnessed such a shameful disregard for the honour of wearing that famous badge.’

‘How could they retreat to their gated Cheshire mansions after that with anything but shame as their over-riding emotion?’

What are we suggesting here, Neil, that they should have slept under the arches at Oxford Road railway station after the match to atone for their sins?

‘As for Paul Pogba, he should never be allowed to wear the shirt again.’

It was a bad tackle that got him sent off, granted, but considering his talent and the fact that he cost them £89m, this might be a little bit of an overreaction.

‘But you could tell it hurt, you could hear players shouting at each other, you could feel their pain.’

But you said they just ‘retreated to their mansions’ just a couple paragraphs earlier, didn’t you?

‘Oh to have a Roy Keane out there one last time.’

Well, Roy Keane is 50 years old, but Mediawatch doesn’t think you meant this literally. Oh, for the 1968 European Cup winning team to have been out there one last team, eh, Neil?

‘When wearing the United shirt meant something. A time long gone.’

Manchester United sold more 3.25m shirts in the 2018/19 season, the last for which figures are available, and they are reported to have sold an extra 800,000 off the back of signing Cristiano Ronaldo. Mediawatch is certain that the shirt still means something.

In his column in the The Sun this morning, Mark Irwin is a veritable hot-take machine. ‘You’ve never had it so good’ is his main piece, in which he explains that, ‘These are truly extraorindary times for English football, a genuine Golden Age [their capitalisation] the likes of which we have never seen before’. Well, that’s a big call, Mark, so let’s see what the case for it is, shall we?

‘To have one team operating at this level [he’s referring to Chelsea beating Norwich 7-0, Manchester City beating Brighton 4-1 and Liverpool beating Machester United 5-0 in the same weekend] is extraordinary. Three? That is just insane.’ Mark seems to believe that this is a ‘Golden Age’ for the Premier League because Chelsea, Liverpool and Manchester City are rattling in goals left, right and centre.

‘A couple of weeks ago Mikel Arteta said he wouldn’t have been able to compete at the top of the Premier League today, because the standard is so ridiculously high’ and then goes on to mention that ‘the Invicibles [won the Premier League in 2004] with 90 points – which probably wouldn’t be enough to finish third this season’. Last season, no-one reached 90 points. Indeed, 2018/19 is the only season when two clubs have reached 90 or more, and the second placed side that season, finished 25 points clear of third-placed Chelsea.

These three teams will play six matches between them this season, and someone will have to drop points from those 18 available. Considering that any team can only rack up a maximum of 114 in season, it would be almost impossible for three different clubs to rack up 90 each throughout the course of the season. It could happen, but it remains remarkably unlikely, especially when we consider that Chelsea, Manchester City and Liverpool have already dropped five, six and seven points between them this season, with less than a quarter of it already played.

And even if they did manage this, the idea that a Premier League in which 17 clubs are mere cannon fodder for the current top three would constitute a ‘Golden Age’ is obvious brain-rot. A ‘Golden Age’ for the Premier League would be competitive for more than just three of its clubs, and certainly wouldn’t consist of an endless parade of the sort of one-sided exhibition matches that we saw at Stamford Bridge, the Amex and Old Trafford.

Gender-Bootral
The Sun have gone all in on the culture wars, and Irwin can’t help himself, even in a tiny sidebar piece about Paul Pogba.

‘As Naby Keita was carried off injured at Old Trafford, at least he could take some comfort from the knowledge that his shin wound had been inflicted by gender-neutral boots.’

Yes Mark, they have women footballers too now. Hadn’t you heard about it? Perhaps they should all wear sparkly boots with pictures of unicorns on them?

‘Not only that, they were also designed by Stella McCartney and made from vegan, recycled materials.’

Considering the absolute state of this planet at the moment, don’t you think that this might actually be a good thing? After all, nobody’s forcing you to wear them. Wouldn’t want to damage that fragile masculinity now, would we?

‘So maybe he can use the three-match ban to work on his tackling because his new boots clearly aren’t helping him?’

Yeah, because it’s the boots that tackle players rather than the person wearing them, isn’t it? Mediawatch doesn’t think Mark is that stupid. Mediawatch merely thinks that Mark sounds like the sort of person who’ll make snide comments about ‘woke politically correct snowflakes’ before muttering about a football boot can’t be a football boot unless a cow has been slaughtered in the process and how women’s football is worthless because their boobs are distracting, or something. Tell us, Mark, who’s the real snowflake here?