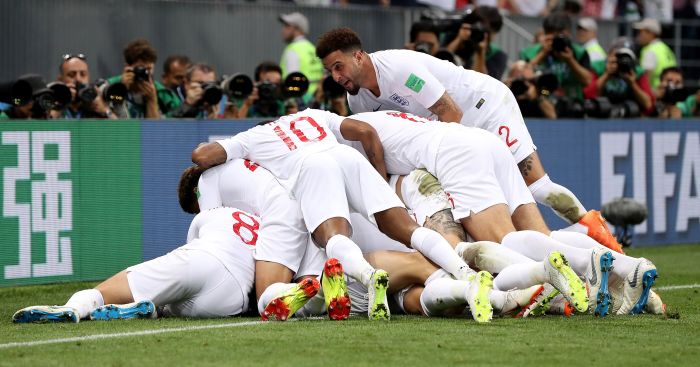 The joy police are here
Whatever you think of the front of the paper – and describing Donald Trump’s rant as ‘home truths’ is enough to make Mediawatch vomit – the Daily Mail‘s coverage of England on Friday is excellent.

They have Martin Keown explaining from a player’s perspective why they should play a strong team against Belgium, Martin Samuel discussing at length the ways in which Gareth Southgate has changed the mood, Terry Venables backing Southgate for the future and Jamie Redknapp stating how impressed he is with the passion of England players to play for the shirt.

And then you get to Jeff Powell’s column on the Mail Sport website, and it all drifts away. Powell is grumpier than a bear with a sore head. Strap in, and Mediawatch will try and keep it brief:

‘The emotional outpouring of public adulation for waistcoat Gary and hot-shot Harry will have the rest of the world gazing with bewilderment upon our infinite capacity for celebrating defeat.’

What a rotten straw man. Nobody celebrated defeat. They were disappointed by defeat, but celebrated progress. They celebrated reaching a semi-final and enjoying watching England play. The inability to see the difference between those two things does not bode well.

Also, a small thing: We’re not adoring ‘waistcoat Gary’, because that demeans his role. We are appreciating the job he has done as the manager of the World Cup semi-finalists.

‘The response to being beaten by a country with a population one-third the size of that of London tells us more about ourselves than we may wish to know.’

‘The lowering of our self-esteem in the half-century since England actually won the World Cup has come to the point where we can rejoice at finishing third or fourth in 2018.

‘Part of the reason is that our moderate football team did succeed in uniting people divided by class, creed, colour, the shabby politics of self-interest, wealth and hardship, even north-south geography.’

Excellent, so he does get it. Can we ignore the first two paragraphs now? Ah, you’ve not finished.

‘Thank God we did not come second in two world wars. And at least the young gentlemen under Mr Southgate’s command bore some resemblance, albeit in a mere sporting dimension, to the valour which characterised their forefathers.’

It’s almost – and we’ve double-checked this so we’re certain we’re right – as if war is a bit different to football. More complex, even. Not worth reducing in such a dismissive manner. Still, at least it’s a big tick on the Daily Mail front-page bingo card.

‘As Piers Morgan said on his television breakfast of non-champions, we must stop teaching our kids that there are no losers in life.’

Mediawatch does not wish to be too sweeping, but ‘as Piers Morgan said’ is a difficult starting point for an argument we will get on board with. Ever.

‘Not that there is any disgrace in reaching the semi-final.’

Good spot, Jeff. Now put that in the context of what came immediately before, add in the joy of belief and of supporters finally enjoying the ride and you might get somewhere near the answer of why people celebrated. Good luck in searching for it.

‘England did over-achieve and much credit to them for surpassing the lowly expectations with which they entered the tournament. But in all honesty that does not resonate with all the heady trumpeting of a golden future.

‘Southgate does deserve to carry on and find out what more his young men may have to offer but his reality is that they do not look good enough ever to climb the football Everest scaled by Alf Ramsey’s formidable team in 1966.’

And there we have it. Well done, but this is the end of the fun and you shouldn’t have enjoyed it anyway. And more fool you if you feel excited about this team, because you shouldn’t. We won’t ever be good enough again.

Except that you should feel excited, if you want. And enthused, and optimistic, and hopeful and buoyant. Because that is what supporting a football team is all about. Whatever Jeff Powell might tell you.

Three is the magic number
In October 2017, The Sun‘s Neil Ashton lambasted England manager Gareth Southgate for switching to a back three in preparation for the World Cup. And we mean lambasted:

‘THE Germans had Franz Beckenbauer while Holland had Ronald Koeman and Frank Rijkaard. England have John Stones.

‘From now on he will play sweeper, the spare man in England’s defence after ­Gareth Southgate confirmed a ­permanent switch to 3-4-3.

‘The system is unconventional and unorthodox, alien to English players brought up on a diet of 4-4-2.

‘But Southgate is set on it. He saw enough reasons in the dreadful 1-0 win over Slovenia on Thursday to ditch his four-man defence for the Lithuania trip.

‘With players as limited as this, it is inviting trouble.’

Nine months later, and with England’s back three working very well indeed in Russia and Stones in particular flourishing, does Ashton eat his words? Of course not. The back three was the problem, you see:

‘Southgate has fixed ideas on the way he wants a team to play, sticking to his principles as England motored through the tournament.

‘In the cold light of day, when he is out running with his dogs again at the family home in Harrogate, he can question some of his key decisions.’

Fair. Mediawatch fully agrees that Southgate will question himself. As any manager worth his salt would do in a similar situation.

‘He arrived at his radical 3-1-4-2 system early, settling on it during a coffee in Sochi with his assistant manager Steve Holland during last ­summer’s Confederations Cup. It was a bold, ambitious and brave move.

It’s a 3-5-2 really. Which isn’t that radical. The Premier League champions famously used it the season before last.

‘He locked into it so early, declaring his hand publicly after the November 2017 friendlies with Germany and Brazil, that he had to persist with it.’

See this is a clever spin from Ashton. The insinuation is that Southgate was so insistent about the formation that he ‘had to’ persist with it, even if he didn’t want to.

Which is nonsense. Ashton wrote in October that the back three would be ‘exposed’ against Brazil and Germany in those friendlies, but England kept clean sheets in both. Southgate chose to persist with it mainly because it worked better than the back four.

‘Of the starters in the semi-final defeat to Croatia, seven — Kyle Walker, Stones, Ashley Young, Kieran Trippier, Dele Alli, Lingard and Raheem Sterling — played in slightly different positions to the ones they occupy with their clubs.’

Now that’s just not fair. Southgate did change Walker’s position, successfully so. But suggesting that Trippier at right wing-back, Young at left wing-back and Lingard in midfield all played in unfamiliar roles takes some stretching of the truth.

As for including Stones, Trippier and Lingard as negatives, well let’s just say Ashton picked the ‘out of position’ Trippier as his Player of the Tournament on the next page.

A reminder: England just reached the semi-finals of the World Cup, and as Ashton notes two of their back three were nominated for the Team the Tournament. It doesn’t sound like it ‘invited trouble’ to us.

Proof
‘Six players prove Manchester United manager Jose Mourinho was right,’ reads the wonderfully vague headline on the Manchester Evening News website. Suppose that if you get ‘manchester-united-world-cup-mourinho’ into a URL, it doesn’t really matter.

Erm, do they? Those six include Paul Pogba, who has played better for France than he did for United last season. Doesn’t that prove Didier Deschamps right more than Mourinho?

They also include Romelu Lukaku. How has Mourinho been proved right here? For buying him last summer? Fair enough.

It also includes Victor Lindelof, which is really bloody ballsy. ‘Based on his performances during this World Cup – where he has been among the most impressive defenders – Mourinho’s instinct was right about his potential,’ Robson writes. So Mourinho was both proved right to sign Lindelof for £31m, but also right to not play him much and to reportedly consider selling or loaning him out this summer? This is becoming harder to understand.

Finally, the list includes Willian: ‘Not a United player – but one Mourinho would like to take to Old Trafford. The Brazilian would probably feature below Gareth Bale in the list of wing options United fans would want to sign this summer – but he demonstrated in Russia just why Mourinho is such a fan.’

Growing on me
‘WEST HAM are set to break their transfer record again as they push for £35million Lazio forward Felipe Anderson’ – The Sun, June 20.

We’d advise West Ham to get the deal done sharpish. It’ll be £60m next week.

Fab four
‘Southgate has got four players earmarked as the shining lights of England’s next crop of talent and the ones he believes have got every chance of breaking through…Ryan Sessegnon…Nathaniel Chalobah… Phil Foden…Mason Mount’ – John Cross, Daily Mirror.

Tell us how you really feel
‘Killjoy FIFA wants to stop TV stations picking out “hot women” in the crowd at games’ – The Sun.

Breaking news of the day
‘Devastated England fan Rob Harvey went back to work yesterday – after booking off the entire tournament to watch it in his hot tub’ – The Sun.

2) He didn’t book off the entire tournament if he’s flown to Abu Dhabi today to work on a building site. The final is on Sunday.

Recommended reading of the day
Paolo Bandini on Maurizio Sarri.