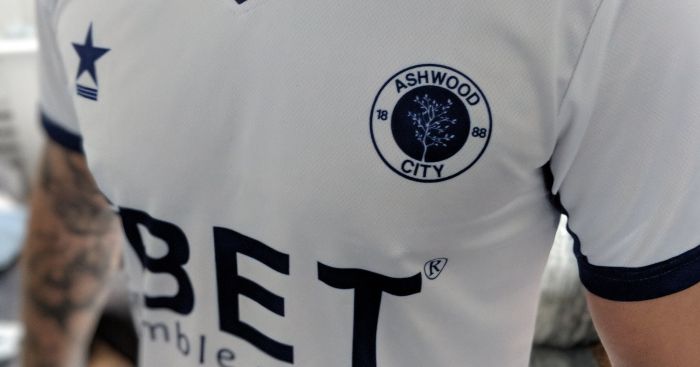 Football jerseys, and whose team’s crest is emblazoned in the stitching, have almost become a separate cultural identity to the game they represent. The colours, the logos, it all serves to signal to the world around you who you are and what team you love.

But one particular shirt has been gradually popping up at your local gym or five-a-side pitch; a football shirt that bears no resemblance to any team you’d find playing in any corner of the UK. Moreover, stickers and logos splashed in these abnormal club colours now adorn the same walls as merchandise from AFC Wimbledon, Leeds United, Notts Country or anyone in between.

These colours lend their support to Ashwood City, the official least legitimate club swamped in Premier League mid-table mediocrity. Over the past year, more and more Twitter users have gradually become engrossed in the goings-on at Kent’s only top-flight side. Conversation around some of the club’s poor results and managerial ineptitude gathered real momentum on social media last season as their CEO, Patrick Nolan, brazenly runs the club as he sees fit, much to the chagrin of Ashwood’s loyal supporters. The hashtag #NolanOut became a rallying point for disgruntled fans.

This Machiavellian (and slightly beleaguered) chief executive has his every action scrutinised, even the conversations he has in confidence with his ‘upstairs’ staff. That’s because ‘upstairs’ is the focus of The Offensive podcast, a mockumentary chronicling the trials and tribulations of Nolan and his club. The podcast follows the fictional Ashwood City as though they were a real Premier League side, right down to the very minutiae of the thing. The serial runs in sync with the actual domestic season and Ashwood takes on real sides from England’s top flight. Their club’s Rwitter account is in full role-play mode as a mid-table Premier League side, recently announcing their latest signings with GIFs and even providing live goal GIFs on matchday – and, always a treat, featuring the occasional disastrous tweet from the club’s media department.

Every Monday morning, subscribers can hear a new episode documenting the club’s fortunes over that matchday weekend. The show eschews largely mundane results against their league opposition and instead focuses on the most recent calamitous decision from their boardroom, and the fallout before another inevitable mistake. As a result, and unsurprisingly so, the fans are particularly vocal with their ill feelings towards the board. The club’s Twitter account receives a tirade of abuse most matchdays.

Doesn’t matter, club is going nowhere with that Fat Tory at the helm. #NolanOut https://t.co/rsRv0oU4Yr

The show was developed for television, but the creators decided to make it into a podcast in August 2018 and have since hitched up at Stakhanov’s production stable. In its first season, The Podcast reached 300,000 downloads and won a bronze prize at the British Podcast Awards, coming in behind productions from the likes of the BBC. The Guardian labelled the show as a ‘must listen’ and best described its concept as ‘The Thick of It meets FIFA 19 career mode’.

The follow-up to the first 35-episode season begins this Thursday, as fans are itching to see what the side has done with the closing of the summer transfer window. There’s still time to follow the club on Twitter, and visit their club shop to buy a shirt in time for your next exhausting kickabout. Then, join the Super Whites this Thursday for a brand new season of The Offensive.

The Offensive is part of the Stakhanov network, the production house behind the Football Ramble, On The Continent and other hugely successful shows.