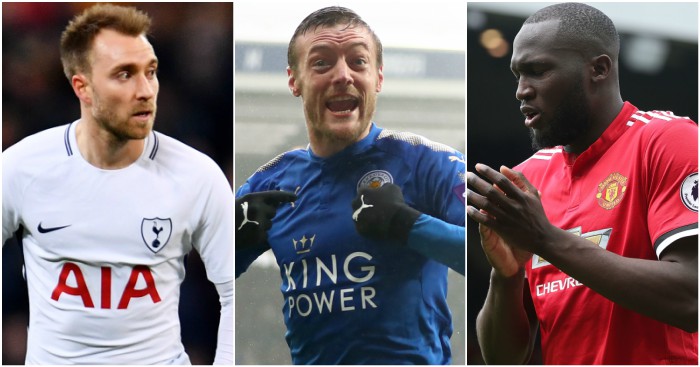 This will be Kante’s first season in the Premier League that does not end with a medal being hung around his neck. The midfield machine missed only one match of Leicester’s glorious title campaign in 2015/16 due to a hamstring injury, while he was absent for three games of Chelsea’s Premier League triumph last year.

His contribution to both titles is measured by the fact that Kante has more tackles (406) and interceptions (309) than anyone else since he arrived from Caen for £5.6million in 2015.

The Leicester striker is on course for his highest number of appearances in a Premier League season, with participation in each of the Foxes’ remaining fixtures set to take him to 37 for the campaign. That total would give him an impressively consistent average of 35.5 appearances during the four seasons he has spent in the top flight. Maybe we should all be on the Skittles vodka…

Vardy’s resilience has seen him become the fourth highest scorer in the last three seasons, behind only Romelu Lukaku, Sergio Aguero and Harry Kane. Leicester have tried to sign centre-forwards to take the burden off the 31-year-old, but none of their recruits – including Kelechi Iheanacho and Islam Slimani – have been allowed to get close to replicating his impact.

Francis took the scenic route to the top flight. At 21, he was playing on loan in League Two for Grimsby having been sent there by Sheffield United. He joined Bournemouth initially on loan aged 26 after being frozen out of the picture at League One Charlton.

For the past three seasons, Francis has been a Premier League captain. He played in every game of Bournemouth’s maiden year in the big time, with only a second-half red card denying him the claim of playing every minute. He followed that with 34 starts last season, with the 33-year-old on course for 33 appearances this term.

The West Brom defender is another who didn’t enjoy an easy journey to the Premier League. After being rejected as a 16-year-old by Bolton and Rochdale, he eventually earned a contract at his hometown team before Dale sold him on to West Brom in 2010. Three years later, he eventually got to pull on a Bolton shirt during a loan spell back in the Championship.

But since returning to The Hawthorns, Dawson has established himself as a key figure for the Baggies. He missed only one game in two seasons prior to this term, when a knee injury kept him out of 10 matches before Christmas. Such has been his form, his presence in the Premier League is set to be maintained despite West Brom’s likely relegation, with West Ham, Wolves and Burnley all sniffing around the 27-year-old.

Dier’s fitness has matched his form for consistency over the last three years with the England star on course to equal his 36 appearances last season, which came after a 37-game campaign in 2015/16.

The 24-year-old’s versatility has helped him amass the second highest number of minutes in Mauricio Pochettino’s squad, with Dier having played almost the equivalent of one of those three seasons at centre-half – away from his regular position in midfield.

Dier’s mercurial teammate is the only creative presence among a top 10 of solid grafters, which is intended as a compliment to the other nine.

The Denmark playmaker has missed only six games in the last three seasons, though he managed to appear in every match in 2014/15. Since the start of 2015/16, Eriksen has provided 38 assists – the second highest total in the division behind only Kevin De Bryne and two ahead of Mesut Ozil.

The left-back is on course to record 35 games a season for the three years Bournemouth have been in the Premier League, with Daniels having played in every tier of the Football League on his journey to the big time.

The Bournemouth defender played every minute in the Premier League last season and though Eddie Howe kept him out of four matches during the first half of this campaign during which the Cherries endured their toughest time since reaching the top flight, Cook has re-established himself as a mainstay in their rearguard.

Despite playing each second of Bournemouth’s creditable campaign last year, Cook managed even more minutes during their promotion year from the Championship, with the 27-year-old missing only 26 minutes of a 46-game season.

Jose Mourinho has said how grateful he is to Lukaku on more than one occasion this term. Only really he and Nemanja Matic have escaped some form of public criticism this season, and though United are not short of players keen to play through the middle, Mourinho has felt unable to rest the centre-forward he described as being “physically a monster”.

The injury he sustained against Arsenal on Sunday could well deny him a third consecutive season of 37 appearances, with the 2-0 win at former club Everton being the only game Lukaku has missed this term after he sustained a head injury early in the 0-0 draw with Southampton two days previously. Even prior to joining United, the 25-year-old averaged 36 appearances per season in five campaigns at West Brom and Everton.

The Spaniard played every minute of Antonio Conte’s opening 51 Premier League matches in charge of Chelsea, including every second of their title-winning campaign last season. After enjoying a well-deserved rest during the 1-0 win over Swansea in November – he was kept on the bench, just in case – Azpilicueta has again played every minute since.

Chelsea’s Mr Reliable has also chipped in with five goals and 15 assists over the last three seasons, during which he has played in every position across the back five.

India v Pakistan at the World Cup: A history in pictures (Cricket365)