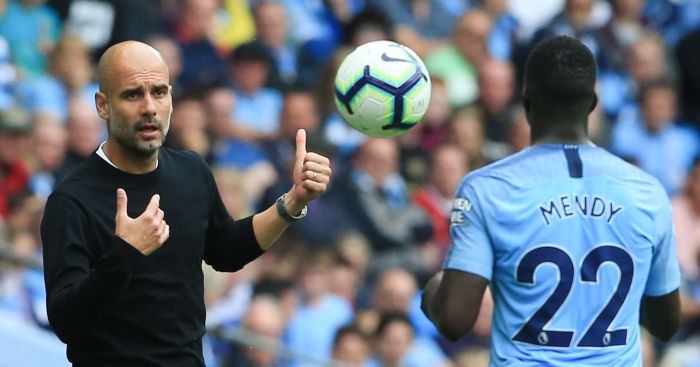 Benjamin Mendy says he sympathises with Manchester City boss Pep Guardiola having to pick the team.

The Frenchman recently returned from a long-term knee injury – which has kept him out of action for five months – and has made three appearances in the space of eight days.

He faces competition from both Oleksandr Zinchenko and Angelino for his left-back spot, a situation replicated right across the Man City squad.

Mendy sees the competition as a positive and admits he doesn’t envy Guardiola when it comes to picking the starting eleven each week, he told the City’s official website.

He said: “We know this team has players in all the positions,” he said.

“It’s not easy for the staff and the manager sometimes to say, “this guy plays”. All the players deserve to play, but we know how we need to work in training and after all the players respect the manager’s choice and we know he puts the best team on the pitch at the weekend.

“All our players work hard to be the best team.”

Guardiola warned about their quality in his pre-match press conference, a view echoed by Mendy.

“Everton is a strong team in England,” he said. “They have good players, we know them, and playing away also is not easy.

“It is not easy to play there but we’ll give everything to do what we need to do.

“When we go there, we want to put on a show, to play how we play all the time, to keep going the same way.

“If we are focused and every player gives his all for the team, we can get the result.”

City go into the game five points adrift of  Liverpool, who have taken maximum points so far this season.

“We are five points behind now, but we still have a lot of games until the season is over,” Mendy said.

“We are focused on us, we try to play as the manager says so that at the end of the season we don’t have regrets, we do everything and we follow his rules.

“We listen to what the staff say about how we’re working, after that, we can say nothing but congratulations to the opponent.

“The Premier League is one of the best for this [strong competition]. You have a lot of teams with a lot of quality, and each team pushes the others to be better.

“Liverpool is very strong team with good players, so it’s nice to have this in this league and it’s what we like. It will be a very good league this year again.”