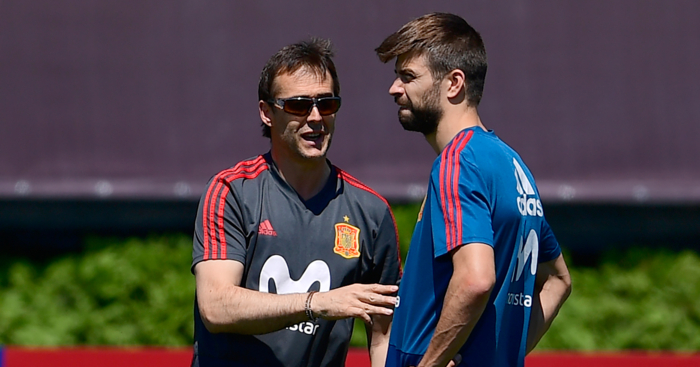 The head of the Spanish Football Association has pointed the finger of blame at Real Madrid as the nation’s World Cup preparations descended into turmoil following the sacking of coach Julen Lopetegui on the eve of the tournament.

Spanish Football Federation president Luis Rubiales acted swiftly to remove Lopetegui – who it was announced on Tuesday will take over at Real Madrid from next season.

Real’s announcement said he would begin his new role following the World Cup, but Rubiales was unhappy to have only been made aware of the news five minutes before the Champions League winners made the news official.

On Wednesday, Spain delayed a press conference at the Krasnodar Stadium by well over an hour before Rubiales addressed the media.

“We have been forced to dispense with the national coach, we wish him the best of luck” he said.

“I don’t want to get into how Real Madrid should go about things. The Spanish team is the team of all Spain.

“The negotiation occurred without the RFEF having any information. (We were told) just five minutes before the press release. We have a way of behaving that needs to be adhered to.

“Obviously there was some sort of problem with communication but we can’t be expected to find out about something like this five minutes (before the announcement) and not take the necessary decisions.”

Spain’s director of football Fernando Hierro will now take charge of the squad in this World Cup.

According to Rubiales, “footballers will do everything they can to take the national side to the further it can go”. But did not want to get involved in their position in the internal debate (Real players, specially Sergio Ramos, defended Lopetegui to stay)