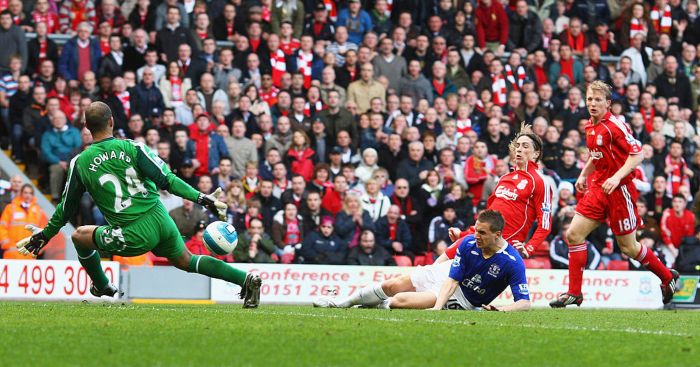 Everton travel to Anfield to face Liverpool on Wednesday night, while Manchester City host Manchester United on Saturday in week full of derbies in the Premier League.

It is often debated which is the biggest derby in football and Howard thinks the Merseyside derby is certainly “the greatest game” he has been involved in.

“It will always be the biggest game,” Howard told talkSPORT. “The Merseyside derby is the greatest game I’ve ever played in.

“It’s a thousand times better than the Manchester derby. Anyone who tells you differently is just pulling your leg.

“[The Merseyside derby] is the one everyone looks forward to, even people who don’t reside on Merseyside, it’s special.”

Howard added: “When you talk about the Merseyside derby, it goes back forever and ever in the top-flight.

“Manchester City were a yo-yo club for a very long time,” he added. “City fans won’t like me saying that, but the facts are there.

“There was a long time when the Manchester derby wasn’t in the top-flight and that takes a little bit of lustre off.

“Of course, now that there’s big money getting pumped in, it’s created that buzz again. It’s brought that alive again.

“It’s still special. I’m going to watch it and people will enjoy it. But if you’re talking about the best one, it’s Merseyside.”