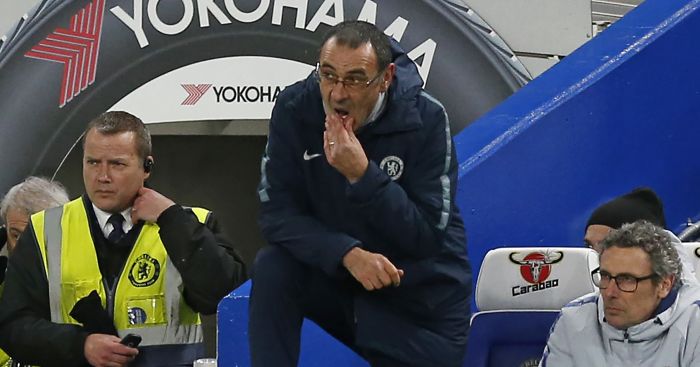 Paul Merson has claimed that only Cesar Azpilicueta, Antonio Rudiger and N’Golo Kante can defend in Chelsea’s squad.

After a positive start to the season, the Blues have slipped behind Arsenal and Manchester United into sixth in the Premier League following humiliating heavy defeats to Bournemouth and Manchester City in recent weeks.

Maurizio Sarri has come under pressure and reports claim he needs positive results quickly if he wants to avoid the sack.

Chelsea take on City in the Carabao Cup final on Sunday with Merson convinced that he must change his philosophy to get a win this weekend.

“You have to give yourself a chance,” Merson told Sky Sports.

“In my opinion they have three players who can defend – Azpilicueta, Rudiger and Kante. The rest can’t defend.

“Don’t go and ask them to play a closing-down game when none of them can defend. Just try and get them back into a shape and work from there and make it difficult for City.

“I am very interested in Sunday to see if he is prepared to change.

“If you are not prepared to change and it goes wrong I don’t see there’s any point in sticking with him as you are never going to gain on Manchester City.”