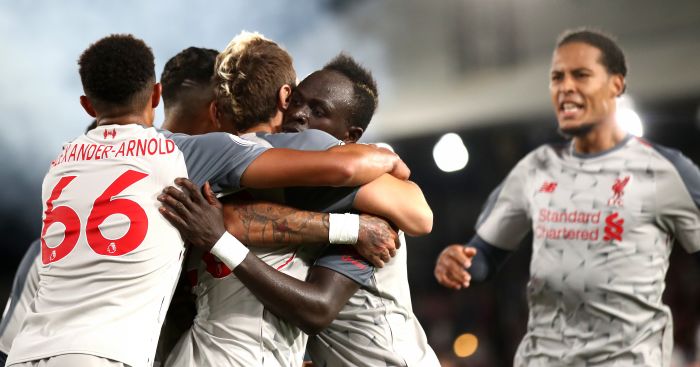 The Reds have won all four of their opening Premier League fixtures this season with their latest victory coming against Leicester City at the King Power Stadium.

Klopp’s men also overcame another tough away trip earlier this season against Crystal Palace and Merson was particularly impressed with their performance that night.

“They went to Palace – a difficult game, Monday night under the lights at Selhurst – and I thought that they were as comfortable as they could be.

“They run, their game management. The centre half, Joe Gomez, is a big plus. There was one point where they were so in control and then Palace broke and one ball through and Zaha was on to it.

“You thought, ‘If Zaha gets away here, it’s 1-1 and there’s two points dropped in a dominant game’. But Gomez got there with his pace and knocked it out for a corner.

“I thought, ‘Wow!’ Van Dijk was outstanding. I just think they’re a real, real good team. The three up front, they’re just going to cause problems.

“I think they’ve got every chance. The full-backs can bomb forward because both Van Dijk and Gomez have got pace.

“I thought last year their Achilles heel was probably on the counter attack, they were open but now with them two at the back and the goalie – I think it’s game on. Van Dijk, his concentration levels, he just looks world class.”