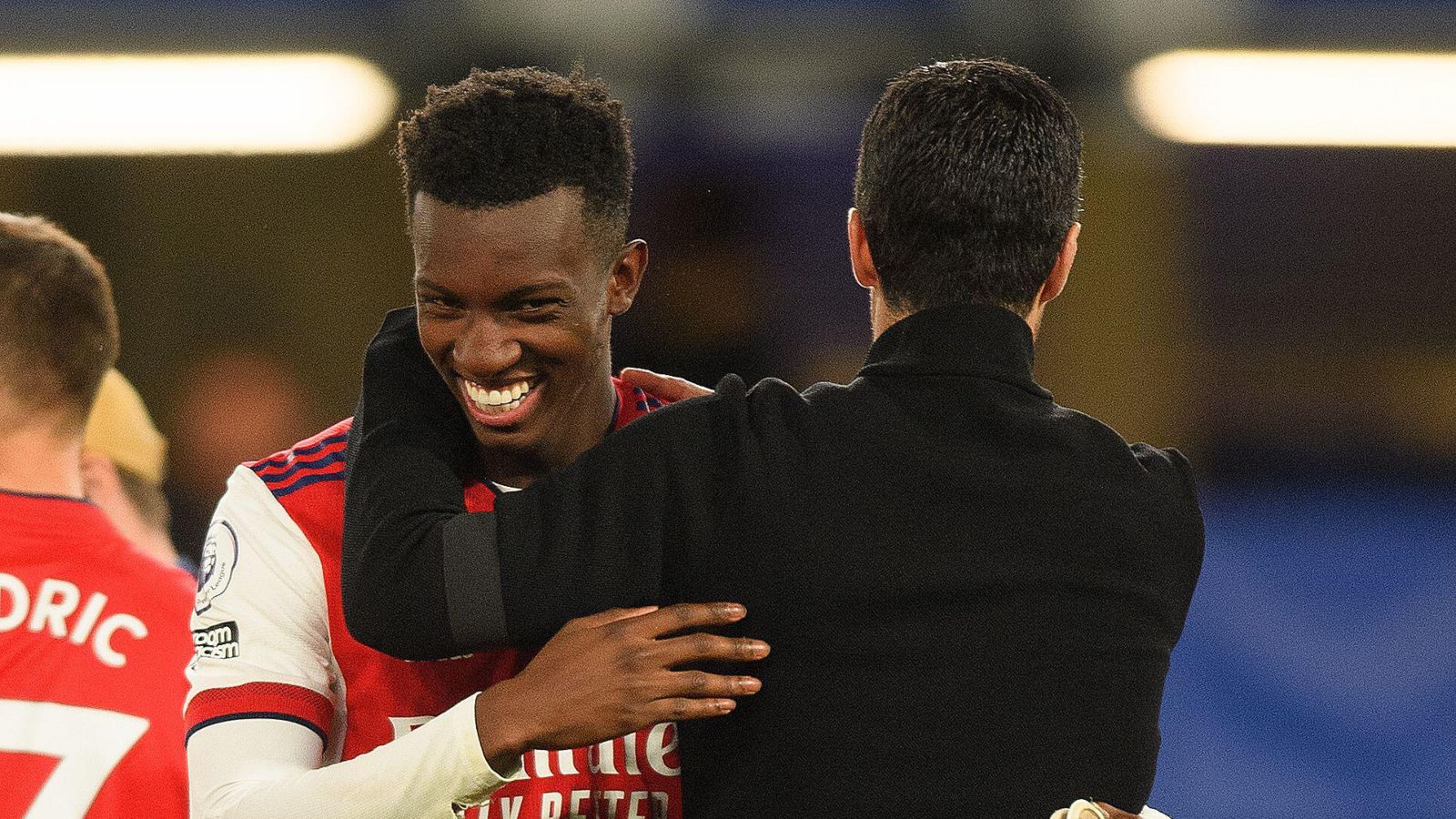 Paul Merson has told Arsenal manager Mikel Arteta to play Eddie Nketiah in every game until the end of the season, even comparing him to Ian Wright.

Nketiah has found himself warming the Arsenal bench more often that not this season, with the vast majority of his minutes coming from the bench or in cup competitions.

However, he notched his first Premier League goals of the season when he bagged a brace against Chelsea on Wednesday evening to help the Gunners to an important 4-2 win.

Arsenal have struggled for goals from their centre-forwards this season with Alexandre Lacazette struggling for goal scoring form and Pierre-Emerick Aubameyang now at Barcelona after falling out with Arteta.

Arteta admitted earlier this week that he has been unfair on the 22-year-old this season.

They still find themselves in a race for the top four and Nketiah’s goal between now and the end of the season could be crucial in helping them secure Champions League qualification.

Former Arsenal man Merson has urged Arteta to play him in the final few weeks but admitted their is no certainty he can keep those levels up.

Writing in his Daily Star column, Merson said: “Eddie Nketiah reminded me of Ian Wright against Chelsea and he should play every game now for Arsenal until the end of the season.

“He is a better finisher than Alexandre Lacazette and should score more goals, so I’d leave him in there and let him have a run in the team. But he is not the long-term answer. He could play against Manchester United and be a 4/10 – there’s no consistency.

“It is like there’s something missing. And that’s why he’ll probably leave in the summer. He says they’ve made him an offer and he’s delaying his decision. He probably thinks he’ll get more game time elsewhere because he knows Arsenal will buy a striker this summer.

“And to be honest I don’t see him scoring 25 goals for Arsenal next season even if he did stay, so maybe it’s for the best if he leaves.

“But for right now, he has to play. Something is missing, but you watch him against Chelsea and the kid’s a goalscorer. He scored two unbelievable goals.”

Merson then compared Nketiah’s performance to Arsenal great Wright, but revealed the difference between the pair was consistency.

“I played with one of the greatest in Wrighty and both of those goals he scored were Wrighty all over. I can’t see Lacazette scoring goals like those. For the first one, he anticipated the backpass, cut across the defender and put it in the corner. It was just like watching Wrighty.

“He’s got that in his locker. But the big difference is that Wrighty was like that every week. Arsenal made tons of chances in the games before that one but didn’t have a natural goalscorer on the pitch. They did against Chelsea.”