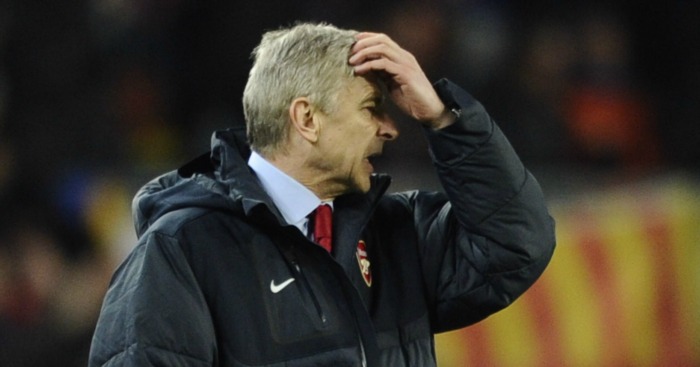 It was Thierry Henry who inadvertently expressed just how tough Arsenal’s task is against Barcelona. In his column in The Sun, Henry spent four paragraphs detailing exactly how Arsene Wenger’s side should approach the tie. The last line said far more than the previous 20: ‘Arsenal must score every time they enter their penalty area.’ Thanks, Thierry.

It’s not even an exaggeration. In Lionel Messi, Luis Suarez and Neymar, Barcelona have three of the top five form players in world football often operating within a 20m² area. By the time you’ve started contemplating about thinking how to stop them, it’s too late. That strikeforce has scored 36 times so far in 2016; Arsenal’s entire squad have 13.

Barcelona’s 6-1 home defeat of Roma in November was the complete attacking display, 5-0 up by 60 minutes and then coasting home. They have lost one of their last 17 Champions League games, a 3-2 defeat to a Bayern Munich side who had already been beaten 3-0 in the first leg. The 3-0 loss to the same club is Barcelona’s only European home defeat since October 2009. In an age where the concept of the continentally dominant football club has been diluted, Barcelona come closer than all others.

Few give Arsenal a chance of parity over two legs. Wenger’s side are a longer price to qualify for the quarter-finals than Barcelona are to win the entire tournament. Luis Enrique will aim to be the first coach to win consecutive European Cups since Arrigo Sacchi at Milan.

If there is any manager who knows the possible impact of defeat to Barcelona, it is Wenger. In 2010, Arsenal drew their quarter-final first leg 2-2, but promptly lost 4-1 in the Nou Camp to end a run of nine unbeaten games. Three points behind Chelsea at the top of the Premier League, Arsenal subsequently took four points from their last five league games and finished third, 11 points behind the champions.

‘Arsenal will travel knowing that Nasri will be fitter, that Barcelona will be without the suspended Gerard Pique and their self-belief may be enhanced by a trophy,’ read the Daily Telegraph’s report from the first leg of their last-16 tie a year later. ‘Arsenal face Birmingham City in the Carling Cup final next week eager to end six years of hurt.’

After capitulation against Birmingham, Arsenal were eliminated by Barcelona in the return leg, promptly lost to Manchester United in the FA Cup and then won two of their last ten league matches. At the time of that Barcelona defeat, Arsenal were second in the Premier League with a game in hand to go level on points with United at the top. They finished in fourth.

Once again, Barcelona promise to shape Arsenal’s season, not through eliminating Wenger’s hopes of winning the Champions League again – although that is likely – but through the psychological impact heavy loss or heartbreaking defeat could have. After the first leg on Tuesday, Arsenal’s next five domestic away opponents are Manchester United, Tottenham, Hull (their FA Cup replay), Everton and West Ham. This is not a time for soft underbellies.

An extended Champions League hangover is an unappetising thought. Arsenal are closer to truly meaningful (sorry, FA Cup) domestic success than for many years, but they are standing on the edge of a knife looking down. If Wenger’s star names are given the runaround on Tuesday, what does that do to Arsenal’s self-professed mental strength? Particularly given that United, Arsenal’s other psychological hurdle, lie in wait.

There is another way, of course. Wenger could pick a reserve side against Barcelona, keeping his players fresh for Old Trafford and sacrificing the Champions League in favour of the title race. It would be a strategy laced with risk, inviting huge criticism, but sometimes fortune favours the brave.

That recommendation is clearly offered with tongue inserted slightly in cheek, but isn’t entirely issued in jest. Many of Wenger’s former players believe that there is a clear hierarchy between Arsenal’s two biggest priorities.

“If he has to choose between the Champions League and the Premier League, he will choose the league because it’s more difficult to win and he is a very competitive person,” said Robert Pires in November, with Nigel Winterburn giving a similar insight into his former manager: “The Champions League is very important, but if you could give him one over the other, I’d say he would take the Premier League.”

I don’t expect Wenger to pick anything but his strongest side on Tuesday, nor in the return leg in Spain. Yet Arsenal’s manager will be all too aware of the potential hangover that can follow punch-drunk defeat to Barcelona. Is there ever a case for saying loving and losing is worse than never having loved at all?