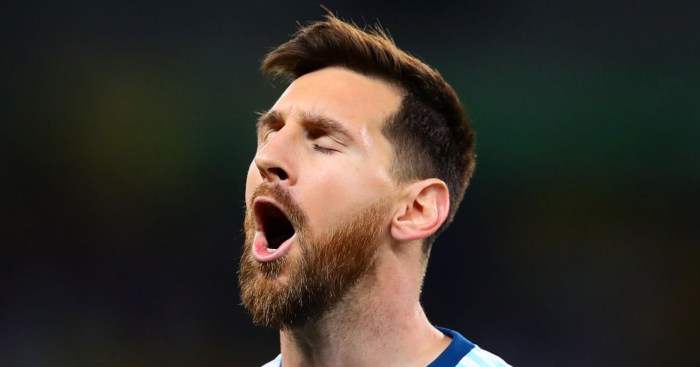 Lionel Messi accused the referee of bias after Argentina crashed out of the Copa America with a 2-0 semi-final loss to Brazil.

The Argentina captain felt a number of decisions went against his side in Belo Horizonte as goals from Gabriel Jesus and Roberto Firmino in each half put Brazil through to a final against Chile or Peru.

Messi was particularly aggrieved Argentina were not awarded a penalty by referee Roddy Zambrano immediately prior to Brazil’s second goal but that was only one of a number of complaints.

The 32-year-old told reporters: “They were not better than us. They found the net early and the second goal came from a penalty they didn’t award.

“They were not better than us. They found the net early and the second goal came from a penalty they didn’t award,” Messi told reporters.

“The officiating was crazy. There were clear penalties, on [Nicolas] Otamendi, on ‘Kun’ [Sergio Aguero].

“He [the referee] was on their side. In every divided ball or dispute, he inclined the pitch their way.

“They [the officials] had called a lot of bulls**t, but they didn’t even check the VAR, that’s unbelievable.

“That happened all over the game. At the first glance of contact, they ruled in their [Brazil’s] favour and this kind of bulls**t distracted us from the game.

“Throughout the tournament they called bulls**t handballs, bulls**t penalties, and bulls**t fouls. But somehow today, they refused to use VAR.

“There is no excuses for us, but we need to review this, analyse it and let’s hope CONMEBOL does something about it – but surely not, because Brazil commands too much power in the organisation.

“I spoke to the referee and he said he would respect us that he would look after us but at no moment did I see that.

“I think we played a great game. We made a great effort and they were not superior to us.”