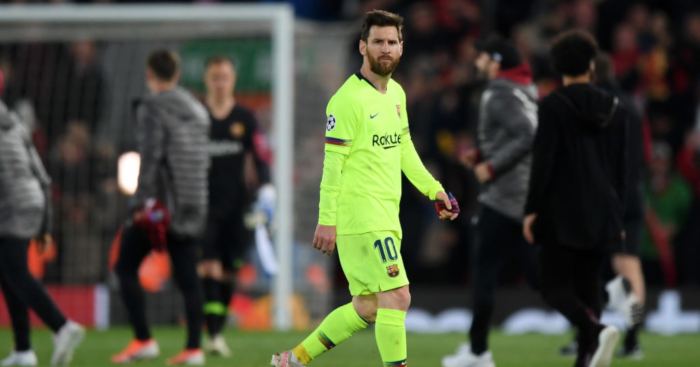 It would be an “injustice” for Lionel Messi to escape blame for Barcelona’s Champions League defeat to Liverpool, according to former Brazil international Ronaldo.

For the second successive season the Catalan side threw away a three-goal first-leg lead: last campaign in the quarter-final in Rome, on Tuesday night in a febrile, hostile Anfield as Jurgen Klopp’s side scored four unanswered goals to win 4-3 on aggregate.

It was a credit to the hosts that Messi, who did so much damage in a late 15-minute spell in the Nou Camp, was restricted to an observer’s role while Luis Suarez was left frustrated.

“It is unfair to point the culprits to a defeat,” Ronaldo said at a Santander event. “I see that Barcelona has a great team and has the best player in the world, which is Messi.

“The other day I read that other players lost and Barca wins [because of] Messi. It is a tremendous injustice to all the players and the coaching staff.

“Barcelona is a great team with great players and very good coaches. You should be a little more careful with criticism.”

On the result of the tie, Ronaldo added: “[Liverpool] had more motivation, intensity and desire. In the first part, Barcelona had chances to score a goal that would have changed everything. But Liverpool deserved it. They have shown strength and emotional intelligence.

“In the fourth goal there was a mistake, but I think that if it had not [been scored], it would have arrived in a different way. They played the game of their lives.

“It’s a shame for Barcelona, because they played a great game in the first leg, we all enjoyed Messi.

“It’s a pity that there is not a Spaniard in the final, but Liverpool deserved it more.”