Home All The News Messi, Ronaldo snub as Modric wins FIFA player of the year 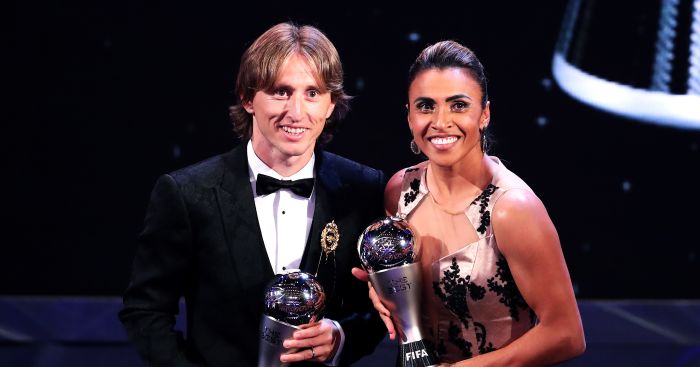 Luka Modric was named FIFA men’s player of the year at a star-studded show in London on Monday, but neither of the men who have dominated the prize for a decade were there to congratulate him.

After 10 years of Lionel Messi and Cristiano Ronaldo passing the award between themselves, Modric beat Ronaldo and Liverpool’s Mohamed Salah to claim the final prize of the Best FIFA Football Awards show, with Messi not nominated for the first time since 2007.

Ronaldo also failed to turn up for last month’s UEFA awards night in Monaco, where Modric also won the top prize for his midfield brilliance for Croatia and Real Madrid.

His agent made it pretty clear that the former Real Madrid man was snubbing that event in protest at not winning, but the official excuse for the FIFA prize was that he is playing for Juventus on Wednesday.

It had been reported that Messi would come despite failing to make the player-of-the-year short list, but the Barcelona star was another no-show.

If the absence of football’s power couple upset Modric, he did not show it.

In his acceptance speech, the 33-year-old thanked his team-mates for club and country in English, Spanish and Croatian, and said how proud he was to win the prize with Croatian great Zvonimir Boban, now FIFA’s deputy general secretary sitting in the front row at the Royal Festival Hall.

Speaking to reporters afterwards, the former Spurs maestro explained how proud he was to win the award, describing it as recognition “for a bit of everything, the season we had with Real Madrid, winning the Champions League again, and then getting to the World Cup final with Croatia”.

Asked if he deserved to beat his ex-team-mate Ronaldo, Modric said he would not get into that, but just wanted to thank all those who voted for him.

And on the big two’s absence, he said: “Everyone has their own reasons. Obviously I would have like them to be here but they aren’t.”

He added that Ronaldo had sent him to message of congratulations after the UEFA prize, but he did not have his phone with him now so did not know if a new message had arrived from Turin.

The evening did not represent a complete changing of the guard, though, as both Messi and Ronaldo were named to the FIFA/FIFPro World 11, a fantasy football side selected by 25,000 professional footballers from 65 countries.

The Spain defender has never been afraid to speak his mind and he was willing to say that it “would have been good for Cris and Leo to be here”.

The World 11’s main talking points, however, were that FIFA’s goalkeeper of the year, Thibaut Courtois, was beaten to the number one shirt by David De Gea and Salah was kept out of the team by an attacking line-up of Messi, Ronaldo, Kylian Mbappe and Eden Hazard.

The Egypt and Liverpool favourite, however, did get the consolation prize of the Puskas Award for the year’s best goal, his twisting run and curling left-foot finish against Everton in the April’s Merseyside derby – a game that the show’s musical act Noel Gallagher described as a “minor derby on the outskirts of Manchester”.

Among the evening’s other big winners were France’s World Cup-winning coach Didier Deschamps and Brazil’s Marta, who claimed a sixth women’s player of the year prize.