Home F365 Says Is there really no hope for Mesut Ozil at Arsenal?

Surely we all want to see Mesut Ozil in an Arsenal shirt again; they need each other. 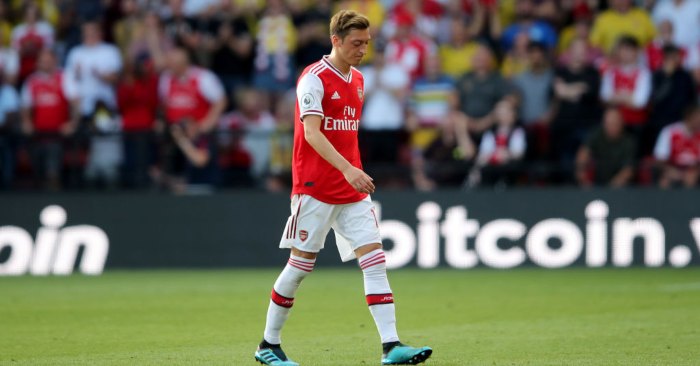 Surely we all want to see Mesut Ozil in an Arsenal shirt again; they need each other.

Forgive the filthy analogy, but if there’s one place where people are in the habit of prematurely shooting their load, it’s social media. Twitter is a place full of absolutes which are liable to change absolutely at a moment’s notice. The reactionary echo chamber can bounce around completely contrasting opinions in a matter of seconds: a slick nutmeg instantly turns a player into Garrincha while moments later a sloppy pass has him labelled as the new Ali Dia.

A case in point is Dani Ceballos, who supposedly had an outstanding game against West Ham over the weekend. According to widely circulating stats, next to the usual fire emoji (which presumably insinuates the player possesses some sort of incendiary power), data reveals that in Saturday’s game the midfielder completed 101 passes, made 124 touches and earned a pass accuracy of 90%. If only there was a caveat to explain that most of these passes were heading back to the Arsenal box, right into Bernd Leno’s feet.

Online these absolutes and selective stats are shot out faster and with as much vigour as El Hadji Diouf’s phlegm – and they’re not helped by absurd calls from professional pundits and journalists. Fulham were condemned to relegation by Chris Sutton before they had even played their second game, one journalist proclaimed on social media that Liverpool were now a dead cert to win the league following their purchase of Thiago, while Gabby Agbonlahor stated that Arsenal will win the title in the next few seasons now they’ve tied down Pierre-Emerick Aubameyang to a new contract.

But despite the obvious overreaction online, there is undeniably a glow emerging around Arsenal. Victories in the FA Cup and Community Shield screamed of natural winners, and you might struggle to recall the last time an Arsenal side bullied and harassed a team in possession despite already being 3-0 ahead on 86 minutes. But that’s what they did against Fulham, while the significance of Ceballos and Eddie Nketiah having a little rustle before that game was not lost on spectators either. Unlike the Gunners sides of recent years, they have started to turn up to games, score and even bring their f**king dinner.

But the West Ham game showed that there are still issues that need attention should they stand any chance of making a real push into the top four. Usually a team earning three points despite a poor display is an indicator of a great season, but you cannot help feeling that the 2-1 win earmarked precisely what they’re missing: a creative outlet to service Aubameyang, who should not be forced to drop wide and deep to tee up an inferior striker in Alexandre Lacazette.

Mesut Ozil did not feature, of course. He was ruled out with a back injury. Or a nose out of joint. Or a knee issue. Take your pick; the result is the same.

Once the Premier League’s most creative player, Ozil can now only dream of becoming a bench-warmer. He no longer occupies that curious space where managers feel like they have little choice to include him, regardless of form. At one time, a defeat without Ozil could be utterly devastating for a manager, who would feel the wrath of a thousand memes from irate fans.

But now Arsenal are starting to find their groove and the five-time German World Player of the Year is in serious danger of getting left behind. With their current trajectory, it’s becoming easier for Arsenal fans not to offer any defence of the player.

No doubt there was a time when criticism of Ozil was unfair; he was scapegoated individually even though Arsenal’s issues were culturally embedded. The received truth is that the German does not turn up for big games and yet Ozil delivered one of his finest performances during the north London derby of 2017, while even as recently as Arsenal’s 2-0 win against Man United earlier this year, he was astonishing, running more than any other player during the first half.

“Finished” Ozil done this in a derby yet Ceballos and Willock get selected over him pic.twitter.com/WeW4gck9mC

But glimmers of brilliant performances were being completely drowned out by the majority of displays in which he offered about as much zeal as a particularly lethargic sloth.

Two weeks ago, the clock ticked over on his seventh year at the club, and following the departure of Emiliano Martínez to Aston Villa, Ozil is now Arsenal’s longest-serving player. In that time, he’s scored 44 goals, assisted 77 and played 250 games. But now it appears he’s been cut adrift, not playing for the side since Project Restart.

In his defence, Ozil has the weight of being associated with the old Arsenal, when what looked like a menacing prospect on paper could be easily broken down by a little fight. But now they seem as though they are starting to learn how to be battle-hardened themselves, while the 31-year-old remains an elusive shape in the shadows, a haunting figure symbolising the past, a German Expressionist film of the 1930s personified.

Last season he featured in 23 games for Arsenal, scoring once and assisting two. He missed 12 games through injury – mostly to his back – and he missed another 19 games because he did not feature in the squad or was an unused substitute. He missed 16 games for similar reasons the season before, scoring two and providing just three assists. This is the player whose 19 assists in a single campaign is the second best ever in Premier League history.

Arteta’s technical director Edu claimed Ozil is not performing in training, therefore the manager is leaving him out. It comes across a bit like a vicious cycle: he doesn’t perform well in training because he’s not getting the game time he wants; he’s not chosen for matches because of his poor training.

But having given so much for the club, Ozil still has his supporters. Ian Wright believes the German just needs a push in the right direction.

“At the end of the day he is still paid to be a footballer for that club and so while he is there you want him to do the best he can for them,” he said. “Now if his attitude isn’t right in training or whatever and the manager isn’t seeing it, I just find it devastating that we can’t get somebody to make him understand how integral he is to what we could be doing right now.”

It’s a reasonable angle to take: some players need that guidance; they aren’t fighters or leaders. Ozil never was and has never claimed to be a commander.

His agent stresses that he will fight for a place. Cynically, though, his contract – £350,000 a week – suggests that he is remaining in north London by default rather than any desire to play. No club would be willing to pay that during these times (or any other).

And so he’s caught in a footballing No Man’s Land that is rapidly emptying of players. Gareth Bale has eventually been able to make it to the other side, while Alexis Sanchez donned golden shackles but has finally wriggled free to make his way to Milan from Manchester.

But you would like to think that Ozil has more to him than Sanchez. It’s not past him just yet. It’s in his hands but might require taking a huge gulp of pride. The leagues in Saudi Arabia, China and even the US are easy get-out clauses, but there is still some hope that he can take up that creative mantle at Arsenal once again.

Is that such a huge leap? He still has Arsenal in his heart, as is clear from his recent jibe at Tottenham, mocking their trophyless cabinet. But regardless of where the blame lies in the current Ozil-Arsenal stand-off, most just want to see one of the best Premier League midfielders of the last decade make a return to the pitch, if you’ll forgive the absolute.