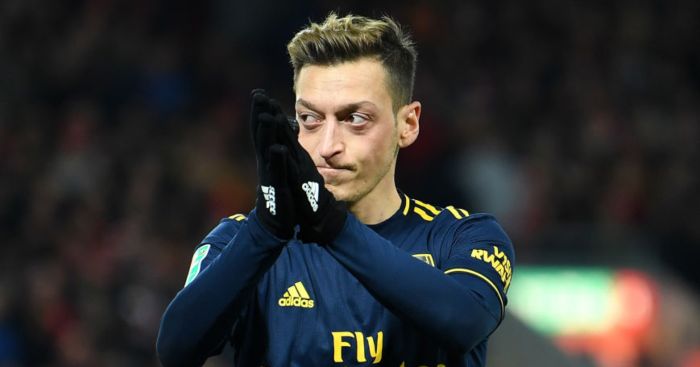 Mesut Ozil has been revealed as one of three Arsenal players not to agree to a 12.5% pay cut.

Arsenal issued a statement on Monday evening confirming that they had “reached a voluntary agreement with our first-team players, head coach and core coaching staff” to reduce their annual earnings during the suspension of the Premier League due to the global pandemic.

The deal will “help support the club at this critical time” and means Arsenal follow Southampton and West Ham in reaching such an arrangement, although both those teams have deferred wages of their playing staff rather than cutting them.

But highest earner Ozil is understood to be one of three Arsenal players to reject the proposal, with the Daily Mirror saying ‘he may be willing to do it in the future’ but ‘did not want to rush into a decision’.

John Cross adds that the German ‘wanted to see the full financial impact’ of the current situation and ‘has urged’ teammates to ‘respect’ his decision as he does theirs.

FEATURE: Every PL club’s fan favourite who outstayed their welcome

Both Arsenal and Ozil’s agent, Dr Erkut Sogut, refused to comment, although the latter said earlier this month that, “deferral is an option but not to agree a cut today when the clubs may still make the same profit as last year”.

The Daily Mail say Ozil and two others are ‘still to be totally convinced of the necessity to take total pay deductions,’ which stand to last for 12 months and will be paid back in full with bonuses if the Gunners secure Champions League qualification.

It is added that Ozil is actually ‘open to accepting a deferral worth more than the 12.5 per cent pay cut his team mates have taken’.

Arsenal believe the matter is ‘the players’ private business’ and so will not make a public statement.