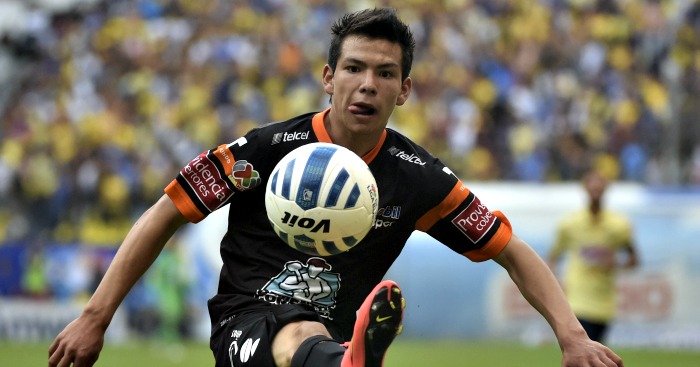 Mexico star Hirving Lozano says he “has not been told anything”, despite reports a move to Manchester City is imminent.

The Pachuca winger scored Mexico’s second goal in El Tri’s 3-0 victory over Honduras on Thursday and afterwards claimed he was in the dark over a proposed switch to Man City.

A Univision report claims the 21-year-old Lozano will sign for City this summer before being loaned out to PSV for the next two seasons.

“I only just heard about it when they asked me,” said a surprised Lozano after the game. “I’ve not been told anything.

“I’ve got to take it calmly and speak about it all with the [Pachuca] directors.”

The left winger has been long since linked with a move to Europe and his declaration that he would welcome a move will not dampen down the speculation.

Asked whether he would be happy to sign for Man City and then be loaned to PSV, Lozano added: “Of course I would be. They are great teams and going to one would be very important.”

The player’s father-in-law claimed last summer that Lozano was heading to Manchester United.

“Yes. It’s all done, just missing some details and after the Olympics, the deal will become official,” Lozano’s father-in-law told Futbol Entre Lineas in July 2016.

That deal was later laughed off by Pachuca’s president Jesus Martinez, who claimed it was simply “not true”.

“They are rumours that sometimes even make you laugh. They do in Manchester, when it is not true, ” Martinez told Univision.