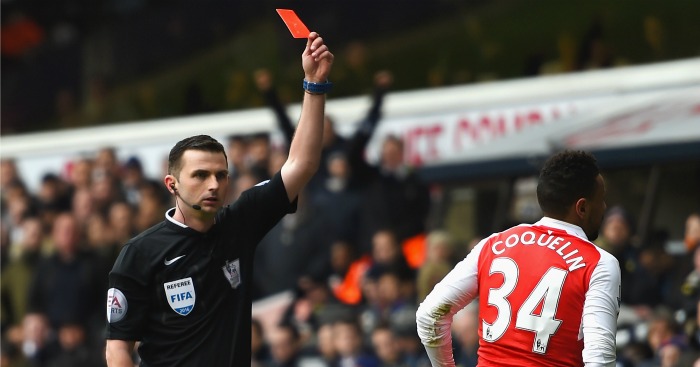 To celebrate the news that the Mark Calttenburg farewell tour is now confirmed, starting with the big West Brom-Bournemouth clash this weekend, WhoScored.com have launched a new referee statistics feature.

You can now find out just how well your team has fared under an upcoming fixture’s referee in terms of both disciplinary records and results in an instant (almost). To get you started, we’ve looked into five stand-out statistics, be they from this season or since the 2009/10 campaign.

1. The mercurial Mike Dean
We start off by simply proving what you already knew. Mike Dean tends to be at the centre of attention when he is officiating. In 19 matches he has awarded 10 penalties – that’s the most per game in the Premier League this season (0.53) – while a total of five red cards is also a league high. Sunderland and Bournemouth have both twice been reduced to ten by the Merseysider.

Interestingly, and perhaps not surprisingly if you look back at some of his actions when refereeing them in the past, three of the red cards he has awarded have been to teams facing Tottenham. He’s only been in charge of Spurs games three times this season but the opposition have had a man sent off in all three, while Tottenham are also the only team that he has awarded more than one of said ten penalties to this season.

2. The mystery of Mike Jones
No football fan likes seeing games disrupted by whistle-happy referees, so if Mike Jones is the man in the middle prepare for the worst. He has awarded the most fouls per game in the Premier League this season (25.79), and of referees to have taken charge of at least ten matches has given the most free-kicks per tackle (0.80).

The fact that he is top on both counts isn’t particularly interesting, someone has to be after all, but the fact that he has awarded the fewest cards per game (3.4) is certainly intriguing. Most would argue that they don’t like to see cards brandished left, right and centre, but this could also be interpreted as weakness if Jones is reluctant to lay down the law. He’s given a card for every 7.7 fouls on average, compared to Andre Marriner at the opposite end of the spectrum (5.4), who has awarded the fewest fouls per game (20.39) but considerably more yellow cards.

3. Lee Mason – the home banker
It may have been a miserable month (or three) for Leicester but if Lee Mason’s statistics are anything to go by, there may be hope on the horizon. He will take charge of the Foxes’ home game with Liverpool next Monday having overseen the highest proportion of home wins in the league (64.3%) and just one away victory from 14 Premier League matches this season (Manchester City at West Brom).

Leicester fans may not feel favourable to Mason’s appointment given that he awarded two penalties to Middlesbrough in the only Foxes game he has officiated this season (a 2-2 draw), but Liverpool fans will have be even more irked by his appearance. Mason has been in charge of Liverpool twice this season, with the Reds losing 2-at both Burnley and Hull.

Out of interest, Jon Moss is the only referee to oversee a greater proportion of victories for the away team than the home team this season.
4. The referee Arsenal should dread more than Mike Dean
It’s well known that Arsenal fans are convinced that Mike Dean is a Spurs fan with a vendetta against them, and the stats from point one in this piece certainly add fuel to the former assumption. However, while the Gunners’ record against Dean historically is pretty woeful, there is one man that has proven to be an even greater bane on their results since the 2009/10 season. 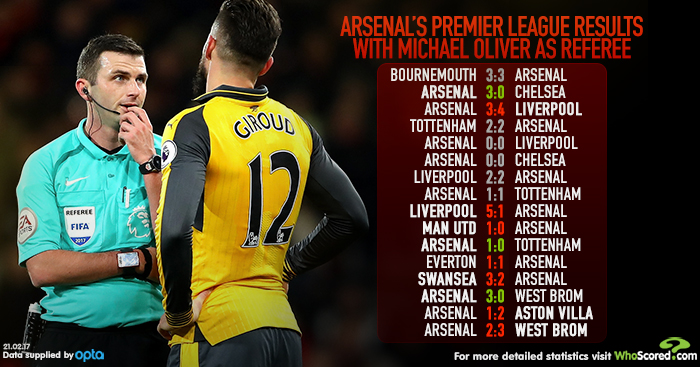 Dean has refereed Arsenal in the league more than any other in that time (27), with Wenger’s side earning just 1.04 points per game. It’s only a slight margin, but they have fared even worse under Michael Oliver in that time – who was in charge as they steamrolled Sutton United 2-0 on Monday. The 32-year old has officiated 16 of the Gunners’ league games since his promotion to the Premier League in 2010, and the Londoners have won just three times. An average of one point per game is worse than the likes of Swansea, Stoke and West Brom have fared under Oliver.

5. The one referee that really loves Manchester United?
As far as claims that officials are favourable to certain clubs are concerned, traditionally it’s Manchester United that most believe were often given special treatment, particularly in the Alex Ferguson era. The likes of Howard Webb and Mark Clattenburg have both been accused of bias towards the Red Devils, though United’s record with the pair in charge pales in significance to that under Lee Mason.