Home All The News Owen: Why Gerrard was ‘on a different level’ to Scholes, Lampard 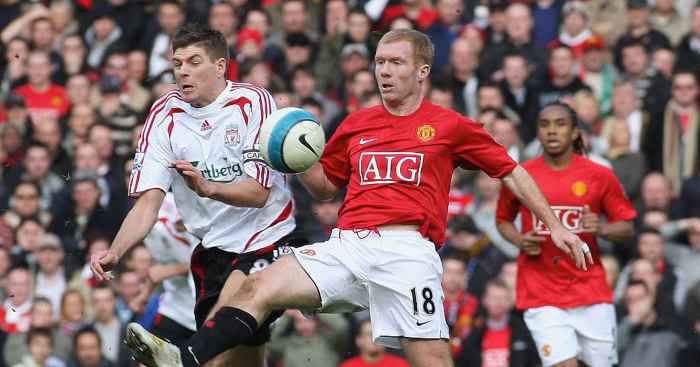 Michael Owen has explained why he thinks former Liverpool midfielder Steven Gerrard was “on a different level” to Paul Scholes and Frank Lampard during his playing career.

It is a debate that has been held time and again up and down the country and now former Liverpool and Man Utd striker has given his view on the best of the three former England internationals.

“If you watch Scholesy in training, your tongue is hanging out,” Owen said on The Greatest Game with Jamie Carragher podcast.

“He can give you the eyes, you can think he’s heading it that way and he’ll almost do a reverse spinner off the other side of his head. He can drop a ball on a sixpence. He is just total and utter genius.

“But there’s that and there’s the actual practicalities of playing on a big pitch where you need size, strength, substance, running ability, all these things.

“And if you play one v one, you against you, Stevie against any of the names that you’ve played, I think he would eat them for dinner.

“Someone like Scholesy obviously had different attributes. I mean, unbelievable the way he changed his game from being a bombing midfielder scoring to a quarterback. Total genius.

“Frank Lampard, who can question his goalscoring and how he got every ounce out of his ability?

“But to me, Stevie’s on a different level than anything I’ve seen or played with and as you’ve said, I’m not blowing smoke up my a***, I’ve played with some great Man United players, Liverpool players, Real Madrid, England.

“Put it this way. If i’m saying tomorrow rewind the clock, you’re going into battle now, you’re playing in the Champions League final, who’s your first pick? I’d have Steven Gerrard as my first pick out of anyone.”