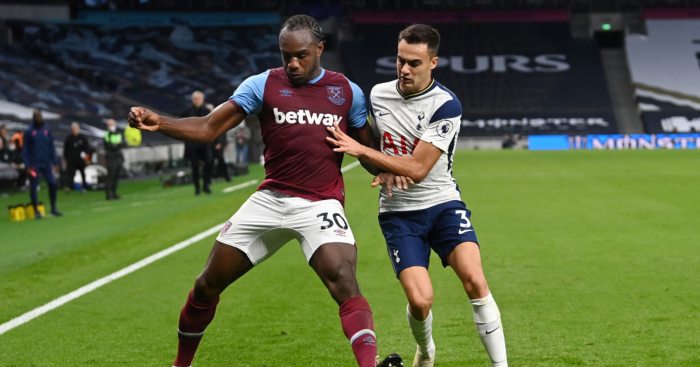 West Ham forward Michail Antonio is tipping Tottenham for a Premier League title challenge after claiming “no one has started the season like” Spurs.

Antonio isn’t the first person to predict a title challenge from Jose Mourinho’s men, with Harry Redknapp, Peter Crouch and Dietmar Hamann all giving Tottenham a big chance this season.

Tottenham have invested in their squad during the summer, bringing in the likes of Pierre-Emile Hojbjerg, Gareth Bale and Sergio Reguilon to strengthen their depth.

And, speaking to ITV’s Football Show Podcast, Antonio doesn’t see “anyone as close” as Tottenham to winning the Premier League title.

“No question about it,” said Antonio. “No one has started the season like them. It’s whether they can keep the consistency. The number of goals they have got. The teams they have played.

“Even the three goals against us in the 16 minutes, it was like, they are prolific. If they can continue doing that then, out of all the teams we have played, I don’t see anyone as close as Tottenham so far.”

Meanwhile, former Spurs winger Andros Townsend – who currently plays for Crystal Palace – hopes Mourinho can guide them to the title.

“I think the game against West Ham pretty much sums up Spurs, at the minute,” Townsend told talkSPORT. “Where it’s amazing for 80 minutes, cruising and then at the last minute, there are three goals.

“There is no-one better than Jose Mourinho to get them over. Hopefully, it can be Spurs but it’s going to be a crazy, crazy season.”