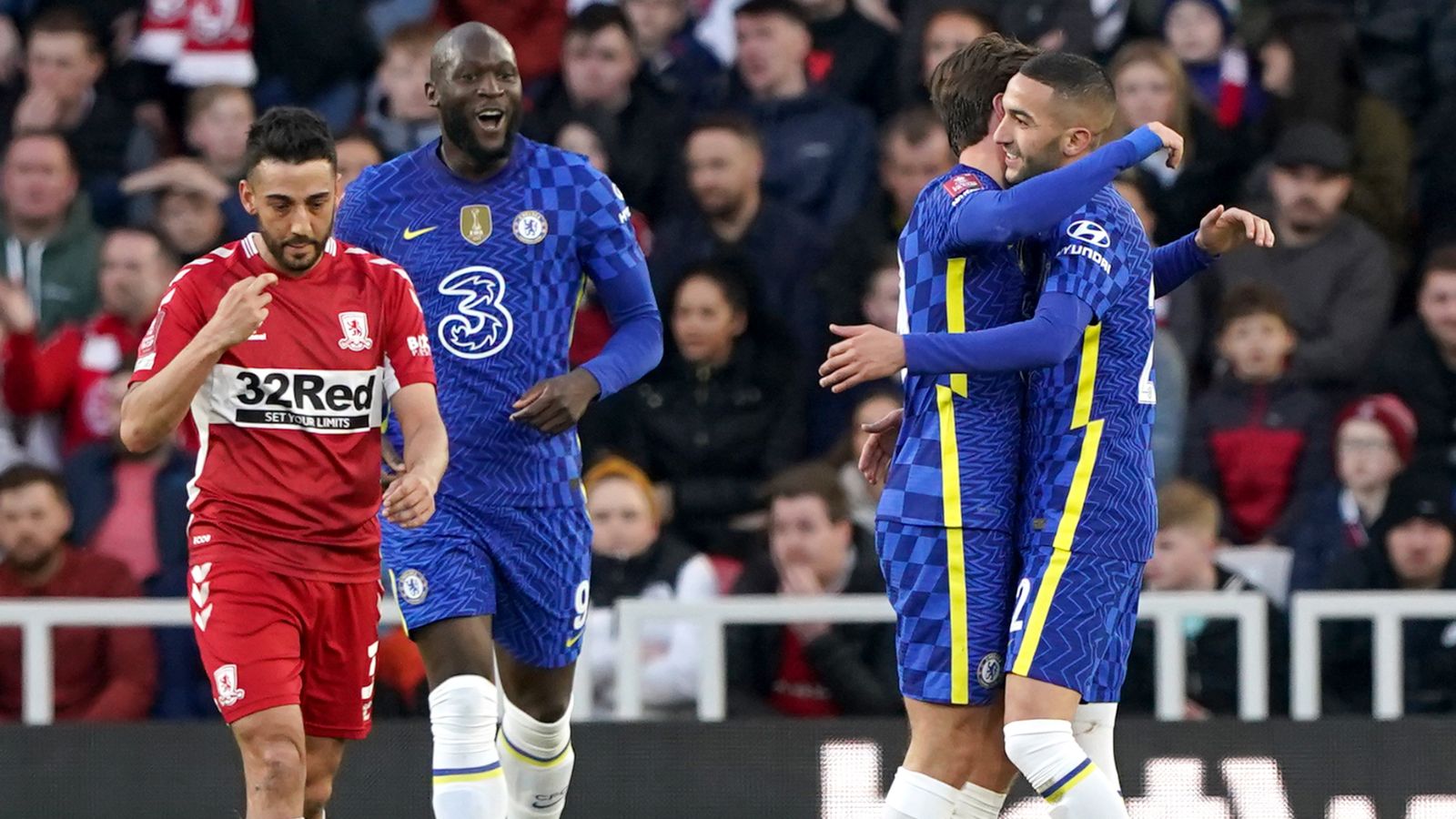 Romelu Lukaku and Hakim Ziyech netted as Chelsea beat Championship outfit Middlesbrough to book their place in the semi-finals of the FA Cup.

This week has been a difficult one for the Blues but this result provided them with a satisfactory conclusion.

Chelsea avoided drama in the quarter-finals as Lukaku and Ziyech had them 2-0 up by the 31st minute.

Fewer than 700 Chelsea fans had made it to Teesside as a result of a restriction on ticket sales under sanctions imposed on owner Roman Abramovich, but it proved a relaxing evening as their side cruised to victory in a repeat of the 1997 final.

Boro, who donated the gate receipts to humanitarian aid in Ukraine, found themselves having to defend deep and in numbers as the visitors, prompted by Mateo Kovacic, Ruben Loftus-Cheek and Christian Pulisic, passed and moved patiently in their quest for an early breakthrough.

It arrived with 15 minutes gone when Ziyech found Mason Mount in space down the right and he sent the ball across goal, where defender Dael Fry inexplicably failed to intervene, in the process handing Lukaku the simplest of tasks from point-blank range.

The pace and endeavour of Isaiah Jones and Marcus Tavernier kept the Teessiders in the contest, and with skipper Jonny Howson snapping into tackles in the middle of the field, Tuchel’s side knew they were in a game.

Lukaku had to head Tavernier’s 26th-minute free-kick clear and Folarin Balogun was unable to hit the target when the resulting corner fell to him as the Championship outfit prospered, although Premier League quality was brought to bear in devastating style 14 minutes before the break.

Boro pressed high as Thiago Silva and keeper Edouard Mendy attempted to play out from the back, but Malang Sarr sprang the trap with a pass to Kovacic, who combined with Mount to allow Ziyech to step inside full-back Neil Taylor and fire an unstoppable shot across Joe Lumley and inside the far post.

Lukaku was denied his second of the game by the alert Anfernee Dijksteel after rounding Lumley from Pulisic’s deflected through-ball, but the home side’s cause looked forlorn as they trudged off at the break.

Fry made way for Sol Bamba to popular acclaim before the restart and Balogun might have done better after being set up Matt Crooks after he had been picked out by Jones five minutes into the second half.

Chris Wilder’s side – who had knocked out Manchester United and Tottenham in the two previous rounds – battled manfully as time ran down with Jones and substitute Duncan Watmore adding new zest.

However, they lacked the cutting edge to trouble a defence marshalled expertly by 37-year-old Silva enough to drag themselves back into the game.

Timo Werner might have added a third but for a block by Bamba and fellow substitute Josh Coburn forced a late save from Mendy at the other end, but the job was done.