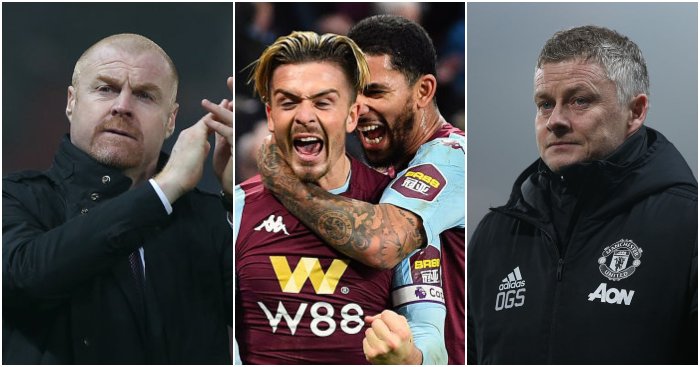 Burnley
Allow me to introduce you to Burnley’s Premier League form from their ninth game of the season onwards:

You would half-expect Sean Dyche to lead a disrobed pitch invasion of Turf Moor on the final day while covered in bacon, such is his penchant for streaks. Never before has a man so effectively displayed his contempt for anything as Burnley’s manager has for xG.

They were slipping and sliding, scoring once in consecutive defeats to Everton, Manchester United, Aston Villa and Chelsea over a 16-day period. Yet the Clarets have now beaten the teams in third and fifth in three days, coming from behind in the former and earning only a third away victory of the season in the latter.

Don’t try and make sense of them. Just sit back and appreciate it. They might have relied on a touch of fortune to overcome Leicester but Burnley enacted their game plan to perfection at Old Trafford and are level on points with the top half as a result. And they can absorb the inevitable upcoming run of four straight losses, too.

Jay Rodriguez
Now sharing a room with Darren Bent as the only players to ever score away at Manchester United in the Premier League with more than two different clubs. Bent’s probably weren’t quite as impressive.

Southampton
Since the week of their 9-0 destruction at the hands of Leicester, Southampton have more points (23) than every team but the Foxes themselves, Manchester City and Liverpool. They were 18th when they were humiliated at St Mary’s, and supposedly identifying managerial replacements post-haste.

A late evening stroll in south-east London three months later has them ninth, above Arsenal and considering an unfathomable tilt at Europa League qualification. If they had beaten Wolves at the weekend in a game they led 2-0 at half-time, they would currently be level on points with Manchester United and Tottenham.

“Out of the carnage of the 9-0 defeat came a team,” Gary O’Reilly – who featured in Crystal Palace’s loss by the same scoreline to Liverpool in 1989 – told the Daily Telegraph a few years ago. “We were born on the final whistle. There was no other way to go.”

It has had a similarly invigorating, reawakening effect on Saints. They deserve credit for staying patient. Ralph Hasenhuttl warrants praise for turning it around. The players should be hailed for their response. They march on.

Steve Bruce’s wor heroes
That really is just silly. Newcastle made three substitutions at Goodison Park: right-back Emil Krafth replaced winger Christian Atsu, centre-half Ciaran Clark made way for centre-half Florian Lejeune and another centre-half in Fabian Schar came on for £40million striker Joelinton. Each of those changes were made at 2-0 down away from home.

Bringing on a centre-half to score twice in stoppage-time to rescue a 2-2 draw might be the single most Steve Bruce thing ever. It, much like Newcastle’s season as a whole, made approximately no sense but worked regardless.

Aston Villa, picking on people their own size
There are various routes to follow in pursuit of Premier League survival. Some clubs prioritise defensive solidity while others focus on attack. Sides have avoided and succumbed to relegation through expansive styles, counter-attacking or bus-parking. A change of manager has alleviated and exacerbated problems to a relatively equal degree over the years.

Wolves have shown recently how to bloody the noses of giants as a promoted club; Aston Villa are more determined to prove that the gap between the Premier League’s bottom half and the Championship’s upper echelon is negligible.

A 2-1 win against Watford was adequate revenge for December’s 3-0 defeat at Vicarage Road. But it also followed a draw at Brighton and victories against Burnley and Norwich, with a shellacking at home to Manchester City wedged in between. Villa are now top of a table consisting of results only between the bottom-half sides, with twice as many points (24) as Watford, Newcastle and Bournemouth in such games.

It is a fine way to ensure safety, to not only secure points for yourself but starve your direct rivals. Villa’s only point against a top-half side came from the 2-2 draw at Old Trafford last month. Yet they have more points against bottom-half sides than Tottenham (22), Arsenal (21) and Manchester United (17). Keep that up and it will be enough.

Bournemouth, showing Howe to win
They needed that. He needed that. Bournemouth would not have been out of touch had they lost on Tuesday, but the effect of five consecutive defeats to Brighton (twice), West Ham, Watford and Norwich – the first four without even scoring – might well have done for them.

So this is a reprieve, albeit one that must be used a springboard instead of a well-disguised trap. Bournemouth followed their last win (1-0 against Chelsea last month) with a run of five defeats and a draw in their next six games. Their most recent victory before that (1-0 against Manchester United in November) was the prelude to five subsequent consecutive losses.

Howe engineered this victory with some genuine change. He reverted to a system that struck a balance between defence and attack that has been criminally absent this season. Jefferson Lerma was at his nightmarish best, while Harry Wilson, Ryan Fraser, Dominic Solanke and Callum Wilson created seven chances between them.

A less pliable opponent will ask more imposing questions in the future but Bournemouth have won the last four Premier League games in which they have started in this 4-4-1-1 formation, dating back to December 2018, and including victories over Tottenham and Chelsea. It is time to stick, not twist.

Leicester
Only the second time since March that they have won a Premier League game without Jamie Vardy scoring, and the first since late September. Decent timing, as it happens.

Sure, they have lost four of their last eight games. But they are eight points clear of fourth with a 14-point advantage over fifth. Thank the lord that everyone else is shit, Brendan.

Aymeric Laporte
Manchester City keeping only a fourth clean sheet of the season in 12 away games might be mere coincidence – particularly as the same opponent was also kept out by Fernandinho and Eric Garcia at the end of December – but Aymeric Laporte’s return from injury was not before time. Sheffield United have had more than one shot on target in all but two Premier League games this campaign; City have now thwarted them home and away.

Dean Henderson
Our early winner will be Manchester United’s first-choice goalkeeper by the end of next season. Fight me, you cowards.

Gabriel Martinelli
Feel free to read more words in 16 Conclusions. But I personally look forward to Arsenal selling Gabriel Martinelli for about £80million to Real Madrid in the next 18 months. In the meantime, build this more tenacious, hard-working, tactically pliant team in his wonderfully gritty image.

Graham Potter
The first relationship after a break-up can always be difficult. Not initially, granted; that is when the future seems brightest and the past darkest. But every positive is viewed through the prism of your previous partner – this one actually has their own car, can cook and doesn’t constantly touch themselves! How endearing.

Then time passes. The process is reversed. Every negative of your current spouse is now put into the context of your old one. Sure, they can drive, but they’re never in. They can cook but sometimes burnt cheese on toast is preferable to coq au vin. And they don’t touch themselves but, actually, I kind of miss that.

Brighton were so besotted with Graham Potter, so impressed by the things he did that Chris Hughton didn’t, that they gave him a two-year contract extension in November after just six months in charge. By January, they might well be yearning for that dependability and doggedness that his predecessor instilled so well.

Where Hughton was criticised for not changing enough, failing to adapt and neglecting to establish a Plan B, Potter is starting to invite censure for changing too much and being overly reactive. The triple substitution on the hour mark at 2-0 down to Bournemouth both kept proven goalscorer Glenn Murray on the bench and saw the deficit increase 14 minutes later. The manager made a statement; his players followed it with a whisper.

That is the dilemma that mid-table Premier League clubs often face when changing managers at opposite ends of the style spectrum. If it works, perfect. If it doesn’t, do you revert to what worked under the previous regime or stubbornly persist on a course with an uncertain destination? Potter might need to start imitating a few of the things that Brighton dumped Hughton for.

Manchester United
What more is there to add? What ground is left to cover? What stone remains unturned? What straw has not yet been clutched as the world blindly pretends that Ole Gunnar Solskjaer is not symptomatic of a wider problem at Manchester United?

The myth of 2-0 being the most dangerous scoreline in football has long been disproved but United are a case in point. They have lost by that scoreline in four of their last seven Premier League games, as well against West Ham in September. Their response to adversity in each has been meek and docile, if indeed there was a reaction at all.

When Chris Wood was asked on the pitch whether playing at Old Trafford renders players “scared”, his answer was instantaneous: “I don’t think so.” He was mistaken, of course. But it is not visiting teams who are inhibited by fear.

“We’ve dominated Burnley but we didn’t get the first goal and that took lots of belief out of us,” said Ole Gunnar Solskjaer after the game. “I thought we had turned that corner.”

As ever, he and his players were greeted by another dead-end. But the manager will continue to admit that things “aren’t good enough”, the newspapers will continue to parrot whatever PR line the club feeds to them and his former teammates in the media will continue lowering the bar to the point it becomes impossible not to clear. Nothing will change.

Blame the Glazers. Blame Ed Woodward. Blame the recruitment. Blame the players. Blame the psychologist who is clearly out of his depth. But anyone who considers Solskjaer’s body of work and still leaves the blame box marked ‘All of the above’ unchecked is either naive, foolish, visually impaired or a combination of the three.

Carlo Ancelotti’s eyebrow
Take it from James Nalton, for he is undoubtedly more intelligent, charismatic, handsome and endowed than I:

‘What happened at the end of this Newcastle game shouldn’t take away from the previous 90 minutes.’

But jolly Christ, that was pure, unadulterated, uncut Everton. Carlo Ancelotti might be literally younger than Chris Hughton, but he doesn’t need this.

Crystal Palace
They have rather quietly embarked on the Premier League’s current longest winless run. Roy Hodgson need not look over his shoulder just yet but one victory from nine is asking for trouble. Exit in the FA Cup third round has afforded them 11 days between defeat to Southampton and the visit of Sheffield United. They must use the break wisely.