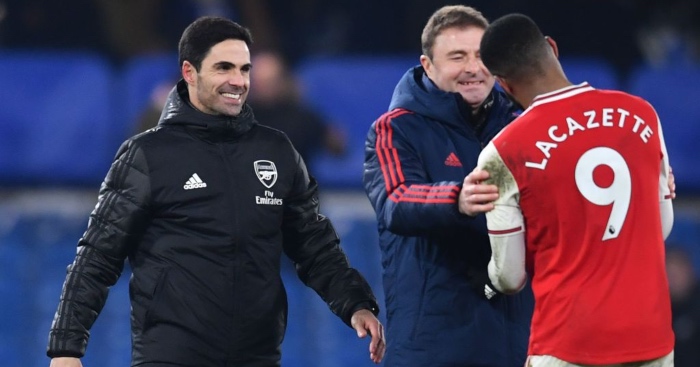 Arsenal boss Mikel Arteta hailed Granit Xhaka and captain Hector Bellerin after the 2-2 draw with Chelsea at Stamford Bridge, and explained why it was “not easy” for Gabriel Martinelli to perform so well.

Arsenal went down to ten men after just 26 minutes after David Luiz was sent off for bringing down Tammy Abraham in the box after a shocking error from Skhodran Mustafi.

Jorginho stroked in the resulting penalty to give Chelsea the lead.

But the Blues looked short of ideas and didn’t take advantage of their man advantage.

And Gabriel Martinelli broke away for the Gunners in the second half to equalise after a slip from N’Golo Kante.

Chelsea thought they’d won it late on as Cesar Azpilicueta tapped in, but captain Hector Bellerin drew Arsenal level again late on as he curled a left foot shot beautifully into the bottom corner.

Arsenal boss Mikel Arteta speaking to BBC Match of the Day: “I am very pleased with the reaction. To do that against this kind of opponent in this stadium, I really value.

“When someone makes a mistake you expect your team-mates to stand up and they showed that belief, I was really impressed with that.

“I wasn’t here a couple of weeks ago but what I am demanding every day they are trying their best to do it. Some are playing in different positions.

“The togetherness and leadership they showed today, this is what I wanted to see.

“It’s very important for the development. We are in the a process and are going in the right direction but I think tonight is a special night for everybody.

“Granit [Xhaka] is – the way he trains every day – his attitude is incredible. I am very pleased with him in that position, the way he came in. I wasn’t expecting Hector Bellerin to score with his left foot but he is fighting hard.”

On Gabriel Martinelli he added: “He is a great kid. He gets in the box. He plays against Cesar Azpilicueta who is one of the best defenders in the league and keeps taking him on. That is not easy.”