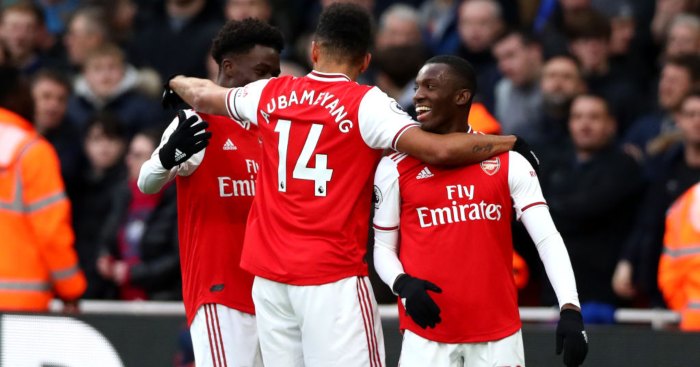 Mikel Arteta admits fulfilling the ambitions of captain and top goalscorer Pierre-Emerick Aubameyang will play a part in convincing the forward to stay at Arsenal.

The Gabon striker hit a brace in Sunday’s 3-2 Premier League victory over Everton as the Gunners rallied from conceding inside 49 seconds to secure their third win in a week.

Richarlison levelled before the break, only for Aubameyang to head home what proved to be the match-winner straight after half-time.

That takes Aubameyang’s goal tally for the season to 17, level at the top of the Premier League scoring charts with Leicester’s Jamie Vardy.

The 30-year-old was linked with a move away in January and rumours continue to circulate, especially given his contract expires at the end of next season.

Arteta insists he is keen to keep Aubameyang at the club and conceded they need to match his ambition in their quest to get him to extend his stay.

“He is a superb player,” the Gunners boss said.

“He completely deserves to be liked by all the other teams. Hopefully we can convince him that this is the right place for him and that he has a future here.

“Hopefully, not just the wins (will convince him to stay) but what we are trying to do.

“Does he really enjoy walking out on to the pitch every time he goes? It’s very much part of what we are trying to build here and I think he is with that mindset at the moment.”

“I think it’s been tough for a player like him because there’s been a lot of disappointment in the last few months or years because he has big expectations and he wants to play for the biggest clubs in the biggest tournaments.

“He wants to be up there with the best players in the world and we have to try and support him and give him everything as a club, so that he really feels fulfilled here. That’s the challenge that we have.”