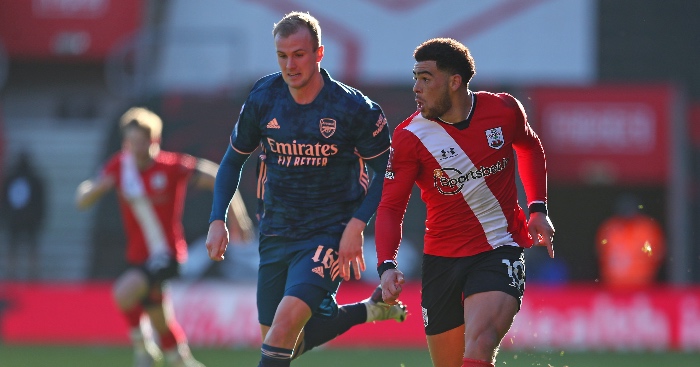 Arsenal boss Mikel Arteta says he is ‘disappointed’ with the way his team conceded in the 1-0 loss to Southampton.

The holders were knocked out of the FA Cup as Gabriel Magalhaes’ own goal proved to be the difference.

They barely managed to land a punch on Southampton and were outplayed for most of the match.

The Saints hit the woodwork on two occasions, through striker Danny Ings and captain James Ward-Prowse.

Kyle Walker-Peters was found by Ward-Prowse on the right hand side in the build up to the goal.

He fired a cross into the box which was deflected by Gabriel. It hit the post and went past keeper Bernd Leno.

Speaking after the defeat, Arteta said: “Really sad to be out of the competition. Disappointed to be out and the way we conceded.

“We had issues in the first half and unforced errors as a result of the high-press they do. In the second half we had two or three big chances but not enough.

“It was an even game. In the first half they won a lot of second balls. In the second half we added more quality. We became more dominant and created chances but it wasn’t enough.”

When asked about the Gunners’ transfer proceedings, Arteta continued: “We are looking in the market and [will] see what we can do.”

Arteta’s men were lacking creativity throughout the match. Willian and Nicolas Pepe failed to impress.

The result ends Arsenal’s six-game unbeaten run in all competitions.

They will now focus on gaining European football through a good league position. Their next match in the Europa League is against Benfica in the round of 32 in February.

Arsenal are also out of the Carabao Cup after losing 4-1 to finalists Man City in December.