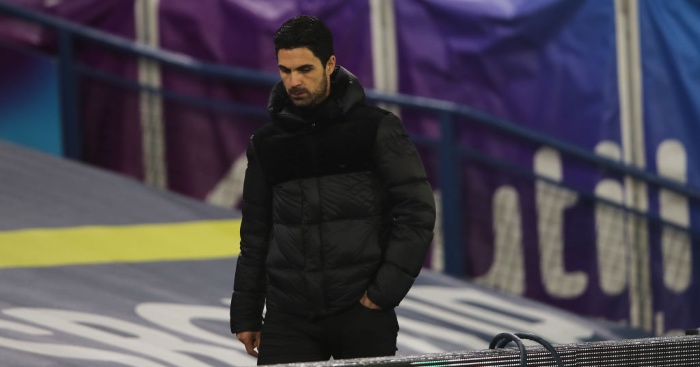 Arsenal boss Mikel Arteta believes Nicolas Pepe ‘let the team down’ with his red card during the goalless draw against Leeds United.

The home side had numerous chances to break the deadlock, but they were unable to do so.

Patrick Bamford and recent signing Raphinha both hit the woodwork.

Leeds dominated large parts of the game but failed to capitalise on their advantage.

Pepe was sent off early in the second half for violent conduct on Ezgjan Alioski when he seemed to headbutt his opponent.

That left the Gunners exposed at times and unable to get as many players forward in attack.

Speaking after the match, Arteta told Sky Sports (via BBC): “Considering how early we got Pepe sent off we have to take it. I never like a draw but in the circumstances it’s a point. It is unacceptable.

“The first half there were two different periods. The game broke a bit, we started to give the ball away and led to them having the space to break. The second half it was a matter of defending well and staying patient and using the pace of our players in the space they were leaving.

“With ten men it is a big disadvantage. I really liked the personality of the team when Pepe let the team down, how we stuck to do what we had to do and had a moment or two to win the game, but obviously it makes it really difficult.”

England international Bukayo Saka also had a good chance to score. He was sent through after a great run by right back Hector Bellerin.

Speaking about Saka’s chance, Arteta said: “It was the best chance in the game, I thought the keeper did well. The reality is they threatened our box a lot and we were lucky on some occasions.”