Home Mailbox Why is Arteta rated highest in the DNA brigade? 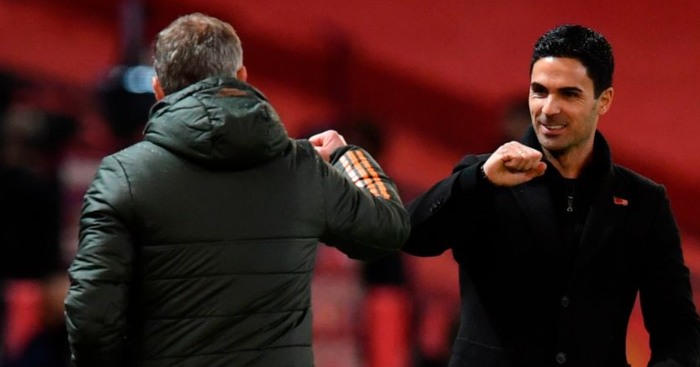 Does Mikel Arteta get more credit than the rest of the DNA brigade? Send your mails to theeditor@football365.com

Why is Arteta afforded more patience than Ole and Lamps?
From Winners and Losers:

‘We knew that Arsenal would suffer stumbles and occasionally trip over their own feet as Mikel Arteta attempted to overhaul their style of play, the team’s shape, the personnel and the mentality. Revolutions are not achieved via linear progression but through a series of fits and starts that, hopefully, produce a general upward curve.’

That was the opening paragraph on Arsenal. Imagine anyone on this site ever writing a paragraph like that about Ole and United if they lost 3-0 to Aston Villa. The Line ‘Revolutions are not achieved via linear progression but through a series of fits and starts’ couldn’t be a better fit to describe Chelsea or United this season, but those teams and their managers are not afforded that kind of leniency and nuanced understanding.

Ole and Lampard are according to the narrative, frauds, chancers, not qualified! Whereas Arteta is, again according to the narrative, the student of the master, the genuine article and very much qualified. I have no issue with Arteta, I think he may well turn out to be a very good manager, but I don’t know why the other two young inexperienced managers in the league, both of whom are from a similar playing generation and both of whom are in charge of big clubs are not afforded the same kind of patience.

I could even understand it if Arsenal were playing teams off the park with wonderful extravagant attacking football and simply falling foul to a run of bad luck or sloppy or porous defending. But no one could genuinely make the case that this Arsenal side is more entertaining than either Solkjaer’s or Lampard’s sides.

So why is it, what is it that the young Spanish enforcer has that those guys don’t, cos right now I can’t see it. Maybe it’s simply the fact that he was mentored by the best, a man who unlike his student is rarely afforded such leniency and unquestioned faith, the permanently underrated David Moyes.
Dean Fairchild

De Bruyne overrated? Really?
What’s up with the KdB hate all of a sudden? So he missed a pen and Salah scored his, so suddenly he’s overrated? I mean Jamie, Eire even mentions Gini as some big game player while forgetting the one moment where he gives the ball away and City could have easily scored. The game I saw was very even with both teams having found ways to effectively neutralize their opponents biggest threats, however all the big chances went to City.

Liverpool were fortunate to have not conceded more than one, while their only big chance was the penalty. I guess some Liverpool fans are still hurt that KdB was rightly awarded the POTY in the year Liverpool won the title.
MM, Man Utd, India

…Jamie, Eire – I’m no Man City fan but to suggest that KDB is overrated by using Wijnaldum as a comparison is most amusing. It’s clear you’re a Liverpool fan trying to shoehorn in a bit of praise for Wijnaldum but I’m not sure why you would have to do it by talking down another player? Yes, Wijnaldum is a good player and did well in the 4-0 win against Barca. But I don’t remember him being quite as good in the 3-0 loss in the first leg, the 4-0 loss to City last season or indeed the 7-2 loss to Villa earlier this season to name but a few matches. That’s the problem when you start judging players by selecting a few matches, everyone can look either amazing or terrible.

I think we can all agree that City have largely been underwhelming in Europe but to lay that on the shoulders of KDB is a tad harsh given there are also 10 other players as well as a manager’ set up that influences things. Or should we just blame Messi for all of Barca’s recent woes?

Oh and finally who was the MOTM in that 4-0 City win last season? A game that you yourself call their biggest of the season every year. That’s right, KDB.
J

…So. Kevin, according to the Football365 mailbox, you’ve been found out. Captain of Manchester City. Reigning Player of the Year. Joint record assists holder. Would walk into any team in world football.

Go on, clear off, sling your hook, don’t let the door hit your arse on the way out.

* Although it still feel uncomfortable describing Leeds United as anything resembling a neutrals’ favourite, there is a lot to enjoy about a team who combines a devastating attack with a shonky defence. That said, if it was going to hold firm against anyone, it would be Crystal Palace.

* The Eagles lined up in an attacking 4-4-2 formation, something that worked so well it inspired Jurgen Klopp to do the same the following day. Eberechi Eze lined up on the left, in front of Patrick van Aanholt, while the midfield paired James McArthur and Jairo Riedewald. Basically, for Palace fans it was like all our birthdays had come at once.

Though Hodgson rarely changes his team unless his hand is forced by circumstances, this was almost a perfect performance for his tactics: ceding the majority of possession to enable the opposition to pass across their midfield and defence, but attacking with intent and being clinical with chances. In United, they had an obliging opponent happy to take risks with the ball to create chances, but with a team of players with minimal Premier League experience making the adjustment at different rates, so no one thinks it will be like this every week. However, the combination of a solid defence, a dynamic midfield and a clinical attack, combined with genuine set piece threats, will be effective over the course of a season.

* Eze was wonderful. Much like Wilfried Zaha, he’s one of those players who, when he gets the ball, makes you think something good is about to happen. In addition, he showed himself a master of set pieces – it was his corner that Scott Dann headed home for the opener, and his free kick was excellent for the second. Not to be outdone, Zaha claimed an assist on Jordan Ayew’s goal, threading the eye of the needle with a great pass.

* It seemed like Illan Meslier in the United goal had a bad day. I’m never convinced by the argument that if you get a hand to something you should catch it/stop it, but he didn’t do enough to keep Dann’s header out, he was Hennesseyesque in his reactions to the free kick, and the own goal seemed to catch him completely unawares. The defeat wasn’t entirely down to him but it wouldn’t be surprising to see the controversial Kiko Casilla given the start next time.

* Patrick Bamford’s first chance being ruled out for offside was absolutely ridiculous. Then again, maybe it’s a sign of poor preparation: if your team have to point where they want the ball played instead of having them understand each other telepathically then obviously you’re just a crouching fraud. His second goal was very well taken, at the end of a good move.

The BBC site mentioned Bamford’s difficult loan spell at Palace five years ago as a contrast to now. Who could have guessed Marcelo Bielsa would be a more effective coach than Alan Pardew?

* Turns out, the game was actually a foregone conclusion: The One More Point blog pointed out that Palace have an incredible record in their eighth game of the season. If only we could be that good in every game, we wouldn’t be so inconsistent.

Crystal Palace have now won as many games this season as Brighton have won since the start of 2020 (4). #CPFC 🔴🔵

*Anyone who saw any of the BBC’s coverage of the FA Cup would likely have seen a former Grantham Town loanee: one of Eastleigh’s penalties in their shoot out was scored by Pierce Bird; Max Watters scored his seventh goal of the season for Crawley Town; between the sticks for Doncaster Rovers was Louis Jones, who I’m especially pleased for as his time at the Meres was curtailed by a broken arm.
Ed Quoththeraven

Cock-up?
Picture it. Bamford anticipates that the ball is about to be played in. He loves nothing more than scoring a goal, always has. The ball duly arrives exactly as he’d pictured, on a sixpence, and he dispatches with ease. However, the goal goes to VAR review and is ruled out. Turns out Patrick got a little too excited as the ball was delivered and his goal is ruled out as he was offside by a stiffy.

Wonder if this would prompt a review of the current farcical system? VAR was supposed to lessen the talking points and controversy, not increase them.
Somerset Dave

Newcastle ambitions
I know times are tough at the moment and that everyone has their own priorities, but if there’s anything you can do to help get across the message to former footballers and managers; that, the average Newcastle supporter does not expect us to be winning titles, europe or even away games against Southampton, that would be so helpful.
Ratt Mitchie – NUFC (If Wilson’s injury is serious our relegation odds look tasty)