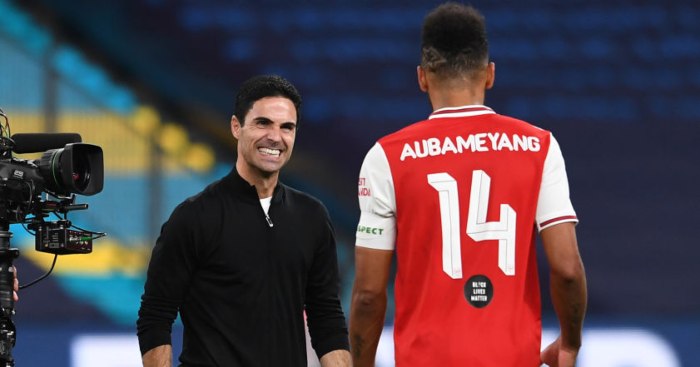 Mikel Arteta is “confident” Pierre-Emerick Aubameyang will extend his stay at Arsenal but is not sure exactly when a deal will be done.

Aubameyang scored both the goals as Arsenal produced an impressive performance to beat Man City 2-0 in their FA Cup semi-final on Saturday, with Gunners fans urging the club to sort out the future of their star striker.

The Gabon international has entered the last year of his contract at the Emirates Stadium and there has been reported interest from the likes of Spanish side Barcelona.

The guaranteed goals that he provides are priceless for Arsenal and Arteta is keen to tie him down to fresh terms as soon as possible.

“I don’t know, to put a date right now is very difficult,” Arteta told Sky Sports when asked whether there was a deadline in place,

“I like the way the conversations are going, I like what I’m hearing. I’m sure for both parties, the quicker we can do it, the better for everyone.

“I am confident he will extend his stay.”