Aubameyang has been linked with a move to Barcelona but Arteta is confident he will stay at the Emirates. 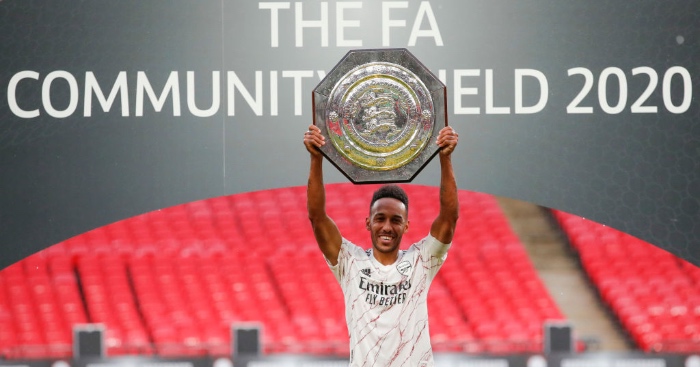 Aubameyang has been linked with a move away from the Emirates this summer, with Barcelona keen on replacing Luis Suarez up front.

Rumours have been increased as the player’s contract is set to expire next summer.

FEATURE: Ponder replays: The end of an outmoded relic?

He told BT Sport: “We are going to see… today we will just take the trophy and that is it.

“I keep saying the same thing. I try to do my job, which is convince him that he is in the right place, that he has the environment here to produce the moments like he’s done today and he’s done here three weeks ago.

“I am very positive that he’s going to sign but a lot of time there’s a lot of things involved in a contract deal and we are trying to show him.

“I think the move from the team [for his goal] was really, really good and he put the ball, all the time, where it belongs, which is the back of the net.”

Arteta seems confident that Aubameyang will extend his current deal and potentially see out the rest of his career at Arsenal.

Aubameyang scored the winning penalty as Arsenal beat Liverpool to win their first trophy of the season.

The match was played just weeks after Arsenal’s FA Cup victory over Chelsea, when they won 2-1 against Frank Lampard’s side.

Aubameyang’s two goals in that game helped to prove once again just how important he is to the club.

The player will be aiming to reach 20 goals once again during the upcoming season. He had a remarkable campaign last term, breaking into Arsenal’s top ten goalscorers of all time and becoming the fastest Arsenal player to reach 50 goals.

It looks like the Gunners are on the verge of tying down arguably their most important player to a long term contract.