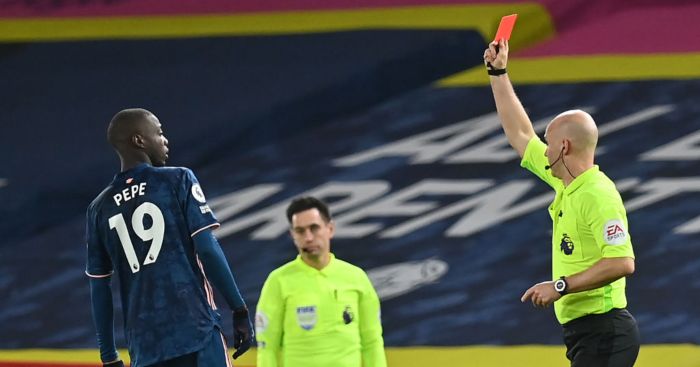 Mikel Arteta says Arsenal winger Nicolas Pepe has his “full support” despite his red card against Leeds United over the weekend.

Pepe headbutted Leeds defender Ezgjan Alioski in an off-the-ball incident and was given a straight red card in the 51st minute of Sunday’s Premier League clash after referee Anthony Taylor viewed the altercation on a pitchside monitor.

Arsenal had been outclassed up to that point but resolutely held on for the rest of the match to claim a share of the spoils – although Arteta was still visibly annoyed at how Pepe had left his team-mates in the lurch.

MAILBOX: Why we should marvel at Salah more than De Bruyne…

The incident has seen speculation that Pepe’s career at Arsenal could be over with Arteta showing his zero tolerance approach in the past to bad discipline.

However, Arteta insists this is not the case with Pepe. When asked if the Ivorian’s time at Arsenal was over, the Spanish boss said: “Absolutely not. I will give Nico my full support all the time…. the threat to finish his career, it is not at all like that.

“He needs to feel that myself and club are going to protect him. We’re giving him time and he needed some time to adapt to the Premier League, a new city, a new language and a new environment.

“You could see at the end of last season. I am going to be very demanding because you can see what he can do. He has reacted the right way and hopefully I can see a player that shows that every week.”