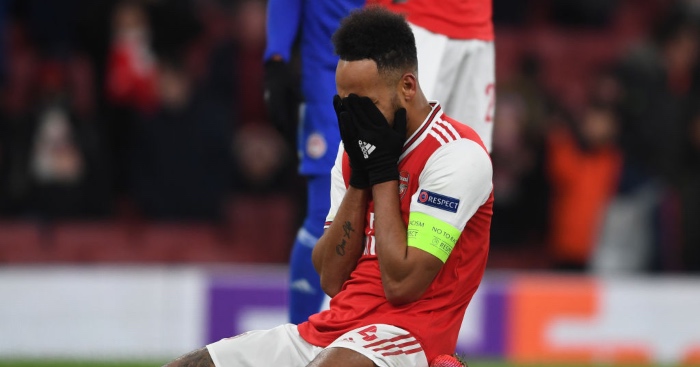 Mikel Arteta says Pierre-Emerick Aubameyang was “gutted” after he missed a huge chance as Arsenal were knocked out of the Europa League in midweek.

Youssef El Arabi’s goal in the dying minutes of extra time ensured it was Olympiacos who advanced to the last 16 on away goals following a 2-2 aggregate draw.

The Gunners struggled to get going and fell to a 2-1 defeat on the night, though Aubameyang thought he had done enough to send Arsenal through when he equalised with an overhead kick in the second period of extra time, after Pape Abou Cisse’s header took the tie into an additional 30 minutes.

“He was gutted,” Arteta said after the former Dortmund striker missed the late chance.

“Obviously he scored a wonder goal that was putting us through in the competition, and with the last kick of the game, he had the best chance of the game.

“He felt very responsible about it, we will try to be right behind him. He has been phenomenal all season for us and now the players have to support him, I think his reaction after the game – to face the media and the way he talked, it was a very mature reaction from him.

“We are all very down, frustrated, disappointed, but my message to the players was that I am right behind them.

“I thanked them for the effort they put into the game, for the attitude and the personality they played with and the way they reacted after we conceded the goal.

“We tried, tried and tried again and completely deserved to win the game but there were aspects of the game that we have to dominate better if we want to keep competing at that level.

“It is part of the profession. We can fall and have disappointments, it is about how we react individually and collectively.

“Then my job is to try to convince them that in the process in which we are at the moment, there are a lot of positive things and as well things we have to improve if we want to much better as a team.”