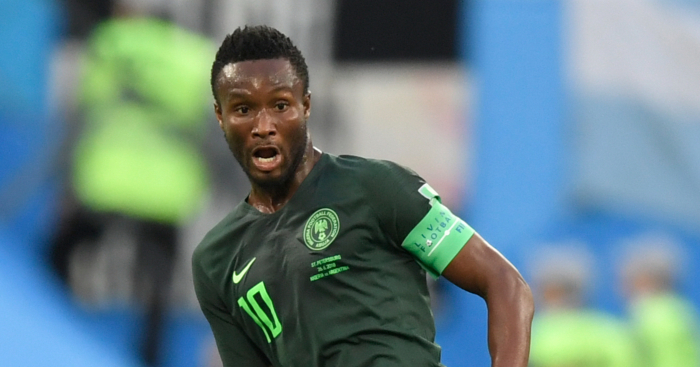 Nigeria captain John Obi Mikel has offered his thanks to police and all those involved in helping secure the safe release of his father who had been kidnapped.

The former Chelsea midfielder told the Guardian and BBC Sport of the ordeal, which was revealed to him four hours before Nigeria’s final World Cup group match against Argentina in Saint Petersburg.

Mikel’s father, Pa Michael Obi, was abducted while travelling in south-east Nigeria. Enugu State Police Command said he had been rescued on July 2. It had been reported a ransom payment of around £21,000 was made.

“For the second time I’ve had to live with the fears of losing my father and it is very scary,” he told BBC Sport. “Today it’s my dad but tomorrow it could be someone else which makes it very scary.

“My father was hurt and tortured during his ordeal and this is unacceptable. I hope that the authorities will work harder to bring these bandits to justice.”

While the police statement said Mikel’s father was “healthy and hearty”, it had been reported he was beaten during the ordeal and was being treated in hospital.

“I will (sic) also like to thank everyone for their kind words of support.

“He is now recuperating with family. My family and I are grateful.”

The midfielder, who left Chelsea to join Chinese club Tianjin TEDA on a free transfer during January 2017, said he had been “emotionally distraught” ahead of the match against Argentina on June 26, unable to tell the coaches or Nigeria Football Federation staff, after it was made clear his father would have been shot if anyone was alerted.

Mikel played the full 90 minutes of the match against Argentina, with the late 2-1 defeat resulting in Nigeria failing to qualify for the knockout stages of the World Cup.

A statement from Enugu State Police Command on Twitter read: “Our men have rescued Pa Michael Obi, the father of the Super Eagles captain Mikel Obi.

“He was kidnapped along Markurdi-Enugu expressway but we rescued him today 2nd July, 2018 around 14:00hrs at Egede in Udi LGA of Enugu State. He is hale and hearty.”

Enugu State Police Command also retweeted a smiling picture of Pa Michael Obi taken at their headquarters, along with one of Ebele Obi, elder brother to Mikel.

Pa Michael Obi had been kidnapped previously during 2011, when Mikel was at Chelsea, before being freed following a police raid.