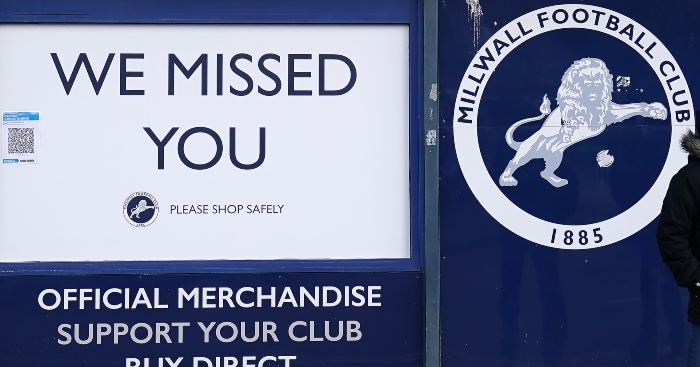 Millwall fans returned to The Den on Saturday for the first time since February before a section jeered as players from the home side and Derby took a knee in support of the Black Lives Matter movement.

In footage seen on social media, booing from the stands is heard after referee Darren England blows his whistle for the players to take a knee, a gesture used to show support for the fight against discrimination following the unlawful killing of George Floyd in America earlier this year.

Only 2,000 spectators were allowed inside the ground due to London being placed in tier two of the Government’s tier system following the end of the national lockdown on Wednesday.

Ahead of the Sky Bet Championship match, the topic of players taking a knee was discussed on Millwall’s fans forum and a statement from the first-team squad was published on the official club website on Friday.

It read: “As a squad we are fully supportive of the entire football family’s efforts in ridding the sport, and society generally, of all forms of discrimination.

“It is our duty as players to reinforce the positive messaging and action of clubs, community trusts, charities and governing bodies, and we do so with great pride and knowledge that so much good work is being done up and down the country.

“The gesture of ‘taking the knee’ before matches provides an opportunity for us to do exactly that and continues to allow all those playing to publicly showcase their support – on behalf of the whole squad – for the fight against discrimination.

“We wish to make clear that taking the knee, for us, is in no way representative of any agreement with political messaging or ideology. It is purely about tackling discrimination, as has been the case throughout.

“We will continue to do this until the start of the New Year when a new and comprehensive anti-discrimination strategy will be announced by the club.”