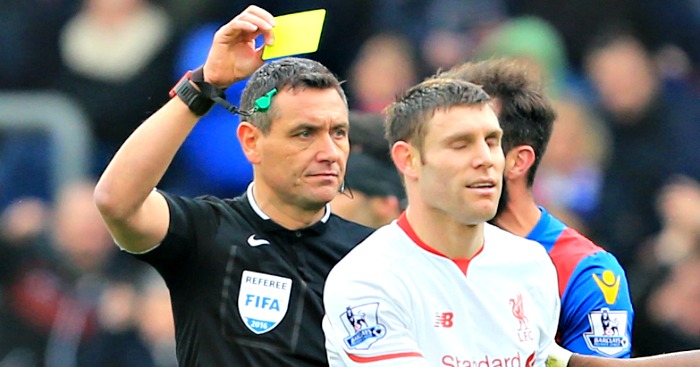 There were a number of stupid red cards at the weekend, but which was the stupidest of all? Let’s take a look…

Francis Coquelin vs Tottenham
The look on his face said it all. Francis Coquelin knew what he had done, but had realised too late. Already on a booking, the midfielder launched into a challenge on Harry Kane. The outcome was predictable.

Arsenal were leading 1-0 at the time of Coquelin’s dismissal. Victory would have placed them level on points with Tottenham, and five behind Leicester at the summit. But a win over their bitter rivals and fellow title contenders would have provided an immeasurable boost in terms of confidence. The Gunners could finally discuss their improved mental strength with some conviction. But Coquelin, who was booked in the first half for an unnecessary handball, conspired to waste the opportunity. Five minutes after he was sent off, Tottenham equalised. Two minutes later, they led. Arsenal rescued a point from their predicament, but it could have been much more. Not to worry, as the 24-year-old was “really sorry“.

Kevin Mirallas vs West Ham
We need to talk about Kevin. First, the dive. Then, the challenge both reckless and needless in equal measure. Everton were 1-0 up when Kevin Mirallas was sent off against West Ham. Though the hosts battled valiantly and even increased their lead at one point, the Hammers made their advantage count to win the game.

Mirallas’ red card is evidence of the pandemic plaguing Premier League football: Referees simply do not like ‘Wests’. Of the 46 red cards handed out this season, over 40% (19) have occurred in games involving either West Brom or West Ham. The former have received three and had five shown to opposition players; the numbers are four and seven respectively for the latter. Thanks, Mailbox.

Mirallas has been a constant source of frustration at Goodison Park since joining the club in 2012. The Belgian has complained of a lack of game time on more than one occasion, once demanded that he take a penalty he subsequently missed, and has previously requested to leave. After Saturday, he was invited to do so by many fans. If the dive in the 16th minute was stupid, his sliding tackle on Aaron Cresswell 20 minutes later was downright mindless. In a weekend of stupid red cards, Mirallas is worthy of his place.

James Milner vs Crystal Palace
You are your club’s vice-captain. You were appointed as such in the summer when you arrived. You are the most experienced player in the side. Your team is 1-0 down. You are on a booking. Do you a) Not make a stupid tackle that will only ever result in a second yellow card? Or do you b) Make a stupid tackle that inevitably results in a second yellow card? You answer b). Congratulations, for you are James Milner.

The most damning indictment of Milner is that his dismissal sparked Liverpool’s comeback against Crystal Palace. Already a goal down, the Reds had looked lethargic for an hour at Selhurst Park. Then Milner lunged in on Wilfried Zaha, was sent off, and the visitors were subsequently excellent. Post-match discussion has surrounded Christian Benteke and Christian Benteke alone, meaning Milner has escaped deserved criticism for a couple of tackles hardly befitting a ‘7/10 professional ™’.

Juan Mata vs West Brom
‘In football, we see things like these every week, but obviously what hurts more is that my team-mates had to fight with ten men for a long time. I have the feeling that both decisions were rigorous; that, in many occasions, we see more serious fouls that are not penalised in such a way, but at the same time I could have avoided them and I take responsibility.’ – Juan Mata, March 7.

“What can I say when you send off a player like Mata? I have asked him if it’s his first red card and he said yes. When you do that you give the first and second yellow within five minutes. You can do it according the rules but I think the referee has to know the person doing it. I don’t think Mata has ever had bad tackles and something like that. You know the first one is a stupid yellow card and then you have to be aware the referee can give a second yellow card. A referee has to decide within one second but when you know the player, Mata never hurts a player.” – Louis van Gaal, March 6.

The ‘not that kind of player’ argument rarely works. The case of Juan Mata is no different. The Spaniard may be mild-mannered, but he gave referee Mike Dean no choice but to send him off on Sunday. And Mike Dean is not a man who requires much excuse to steal the limelight.

Three minutes separated the two bookings handed out to Mata at The Hawthorns. Darren Fletcher became the 27-year-old’s nemesis, first taking the free-kick which Mata illegally blocked, then inducing a trip from the Spaniard soon after. With the scores level at that point, West Brom earned an advantage they would duly take.

Jose Fonte vs Sunderland
If Fabio Borini is through on goal, let him go. The odds are he won’t score. Silly boy, Jose.