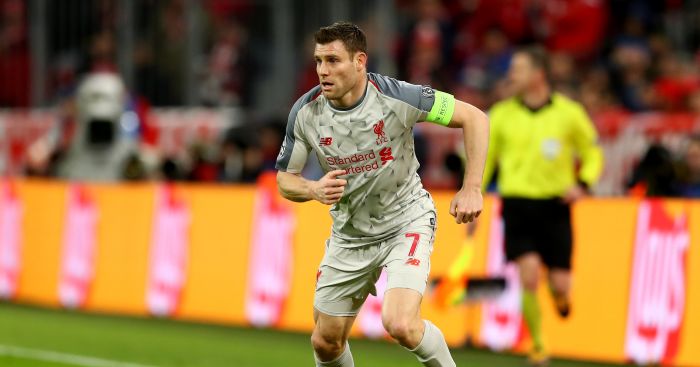 After five successive European defeats away from Anfield, Jurgen Klopp’s side – losing finalists last season – came good when it mattered to beat the Bayern Munich 3-1 in the Allianz Arena to secure a place in the last eight.

Sadio Mane’s brilliant opener was cancelled out by Joel Matip’s own goal before half-time but Virgil Van Dijk’s first Champions League goal for the club meant Bayern then had to score two more.

“It is good for English football,” Milner told BT Sport. “That’s what you want. I don’t think we want to play each other in the next round but we’ll see who we get.

“We have good feelings from last year so hopefully we can carry that on and go as far as we can.”

Milner was impressed how Liverpool bounced back from losing Jordan Henderson to injury part way through the first half, with Fabinho coming on in his position.

“It says a lot about the squad we have got,” Milner added. “To lose the captain that early was difficult but we dealt with it well. Fabinho came on and did well then we scored.

“It was a good result. We didn’t play our best but it is about defending well and getting three points.

“This guy [Van Dijk] got another goal. To be honest, he should get more given his height!”