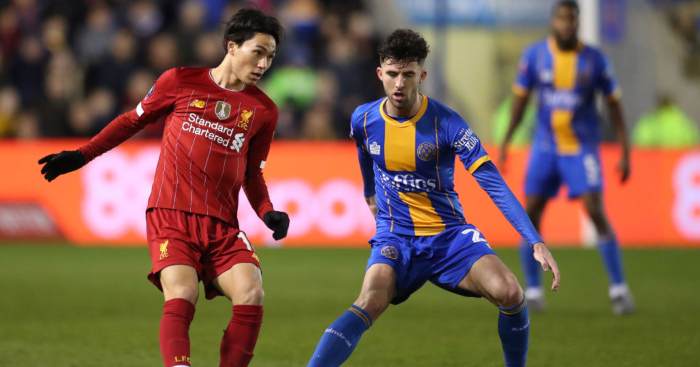 Liverpool attacking midfielder Takumi Minamino has named three things he needs to improve on if he wants to make Jurgen Klopp’s starting XI on a consistent basis.

The Japan international started as Liverpool could only manage a 2-2 draw against Shrewsbury Town in the FA Cup fourth round.

Jason Cummings scored twice in 10 second-half minutes, almost snatching an added-time winner, to give his side a dream trip to Anfield and hand Reds manager Jurgen Klopp the replay he was dreading – and potentially ruin their plans for their mid-season break next month.

It left Klopp hugely unimpressed at having another match to fit into what has already been a heavy schedule, especially as it was all so unnecessary having been ahead through Curtis Jones’ second FA Cup strike in successive matches and a Donald Love own goal.

It was Minamino’s third appearance for Liverpool and the 25-year-old was unhappy with his second-half showing.

“I need to raise my tactical awareness and show my versatility,” Minamino told Kyodo News.

“I started in a role that I’m used to, where I was able to receive the ball in good positions, but in the 2nd half I became less involved. I have to be more aggressive”