Bournemouth reckon they are victims of a 'big-club bias'. Mings got a five-game ban. Rojo gets nothing. 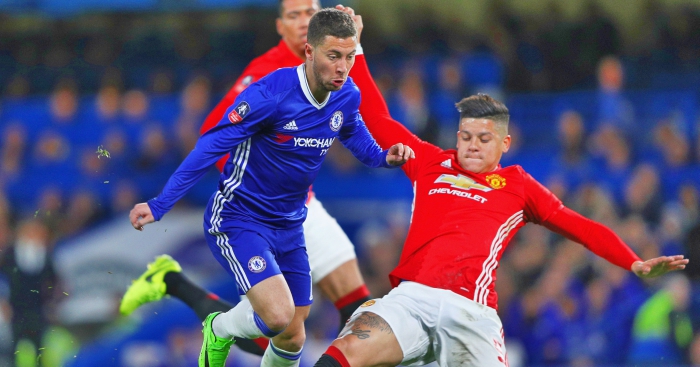 Bournemouth are ‘furious’ that Manchester United defender Marcos Rojo has escaped punishment from the FA for an apparent stamp on Eden Hazard.

Rojo clearly treaded on winger Hazard during Chelsea’s FA Cup victory over United on Monday, but the Argentina defender will not be punished.

The incident came less than a week after Bournemouth defender Tyrone Mings received a five-match ban for a similar stamp on Zlatan Ibrahimovic, who was also banned for three games for elbowing Mings in retaliation.

According to the Daily Mirror, Bournemouth find it ‘crazy’ that Rojo was not punished in a similar manner, fearing that they are victims of a ‘big-club bias’.

United were charged with failing to control their players against Chelsea, and the club could accept the charge and subsequent £20,000 fine, but the incident involving Rojo and Hazard was included in referee Michael Oliver’s report, and so cannot be reviewed.

Moments after the FA announced their ruling, with it becoming clear the United defender would not be charged, Mings tweeted the following:

“That is a stamp,” said Alan Shearer of Rojo, talking to BBC Sport.

When asked whether Rojo could face retrospective action, he replied: “It wouldn’t surprise me at all.

“He should have been sent off for that.”

Phil Neville added: “Definitely, I mean after what we saw last week at Old Trafford with Tyrone Mings, you’d think the FA would look at that.”

Stanley Victor Collymore weighed in as he does, offering his thoughts on the escape and calling for a change in the way FA review incidents.