Home F365 Says Misogynist boors, get used to it: women’s football is set to boom 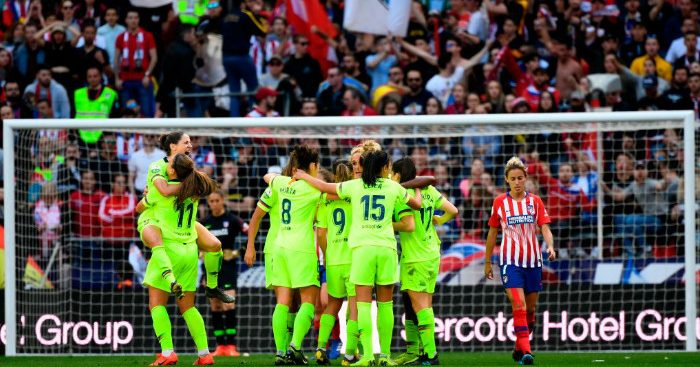 It has not been a good few weeks for the ‘nobody cares about women’s football’ crowd. In Madrid, 60,739 people attended a Primera División game between Atletico Madrid and Barcelona. In Turin, Juventus Women played in the Allianz Stadium for the first time. In England, Barclays announced a multi-million pound sponsorship deal with the Women’s Super League.

Increased crowds for one-off events might prove nothing, but they certainly suggest an appetite and audience for high-level women’s football and will certainly provoke further initiatives. The message is pretty clear: if you build it, they will come and watch.

Barclays’ sponsorship is monumental for women’s football in England because it assists the clubs who have been struggling, like Women’s Super League side Yeovil Town, who may have to go part-time at the end of the season due to financial issues. Meanwhile, the more powerful clubs (Chelsea, Arsenal, Manchester City and Tottenham and Manchester United, if they are promoted) can increase their budgets accordingly to compete with Europe’s best.

There’s more. Ahead of this summer’s World Cup, England won the SheBelieves Cup for the first time and will thus head into the tournament with realistic hopes of matching their semi-final achievement of 2015. BBC Sport announced in 2017 that it would broadcast extensive coverage of every game from the 2019 World Cup across TV, radio and online. This swell of goodwill and popularity matters.

All good news, then, presumably matched by universal support? Behave. Out came the cynics, boors and bores in their droves. Some opted for social media patronising. Others resorted to dismal chauvinism or sexism. Many more boasted that they hold no interest in watching women’s football. Thanks for keeping us informed, fellas; we’ll update the database. People used to recommend things they like. Now they consider it their duty to tell the world what they don’t like.

A history lesson, for those who still need it. Women’s football became widely popular in England in the late 1800s, but was first banned by the Football Association in 1902 when they threatened to punish clubs who allowed women to use their facilities. The men’s game had grown exponentially due to factory workers demanding Saturday afternoon entertainment, and the rush of women into industry during the First World War allowed the ban to be relaxed. By 1920, crowds often outnumbered men’s matches.

But of course the men’s game couldn’t have that. In 1921, the Football Association banned women from playing organised football on their pitches. The reason given was that football was ‘quite unsuitable for females and ought not to be encouraged’ – mansplaining has a rich and long history – but in reality the FA felt threatened by the success of the women’s game. They were concerned that Football League attendances would suffer, and admitted their annoyance that women’s matches often raised money for charitable causes rather than feeding it back into FA coffers. “This is our special thing; we can’t have women ruining it.”

In 1946, 25 years after the second ban was issued, English football’s governing body doubled down, calling women’s football ‘evil’. It took a further 25 years for women’s football to be recognised by the FA. Welcome to the 20th century, guys. You’re only 71 years too late.

Imagine for a minute if men’s football had been banned over the same period. Rugby would be our national winter sport. No England at World Cups until 1974, at which point we would be an international minnow playing catch-up. No World Cup win. No Manchester United in the 1960s or Liverpool in the 1970s. No Premier League by 1992. No deep discussions with ageing family members about players and managers of yore. No legacy. No cultural dominance. Just generations of men being told to “get back into the office”. There’s no place for men in this game, you see.

I’m being silly for effect – of course all that could never have happened. Not to men. The history of women’s football is a history of male privilege. It hammers home the vital difference between men’s and women’s sport: the former has always been cherished and championed, but the latter achieves in spite of organisational and societal roadblocks. Inequality is a brick attached to the feet.

There will be cynicism about Barclays’ investment, just as there was in some quarters when the Telegraph announced their women’s sport initiative last week. But the reality is that it doesn’t matter. Even if it is good for the ‘brand’ to invest in women’s sport, so what? The exposure it provides is just as valuable as the financial commitment. At worst, this is a symbiotic relationship. Wanting to be seen to do the right thing doesn’t make what you’re doing the wrong thing.

It’s usually about this time that someone with a column pipes up with the ‘positive discrimination’ argument. ‘The worst form of inequality is to try to make unequal things equal,’ they might write. ‘The only way for women’s football to achieve true relevance is to make it entirely on its own’.

Nonsense. That only works in an environment where the unequal elements weren’t rendered unequal through deliberate sabotage and strangulation. You don’t get to sh*t on women’s football for 50 years, watch it grow exponentially despite the monumental roadblocks placed in its path during those 50 years, and then moan when it is finally given some support. Even if you do consider that women’s football is getting financial investment beyond its merit (and I don’t buy that), maybe that’s going a tiny way to redressing the long-term balance. Leg-ups aren’t inappropriate when something has been trampled into the mud.

There will soon be an explosion in women’s football, if it hasn’t already occurred. This summer’s World Cup will be given blanket coverage in the UK like never before. WSL clubs will have greater financial muscle and thus greater sway in tempting the game’s best players to England. The Telegraph’s move might well provoke other media outlets to follow suit. Something special is building.

So please don’t listen to the ‘erm, when is International Men’s Day?’ brigade. Ignore the ‘yawn, nobody watches it’ army too. And for goodness sake put your fingers in your ears when the ‘political correctness gone mad’ posse crack their knuckles and take to the keyboard. If you don’t have the interest, no problem. But there are more and more who do – and more and more who will soon.