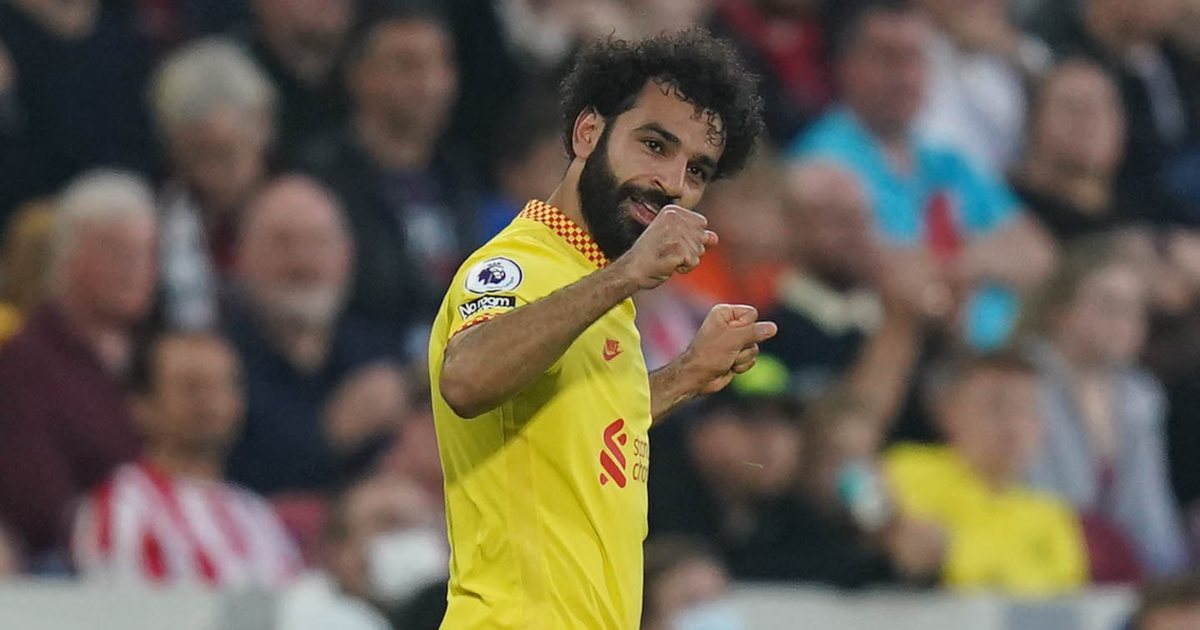 Mo Salah ‘spurned sitter after sitter’ for Liverpool even though he scored once from three shots.

Salah daze
Last week The Sun reacted to Liverpool beating Crystal Palace and going top of the Premier League table by telling is that the Reds were now dirty buggers and were second in the fouls table.

‘KOP THAT! Klopp boys fight at top of (fouls) table’

So top of the actual Premier League table and second in the fouls table but it’s the latter that was the headline. Of course it was.

This Monday Liverpool are still unbeaten in the Premier League since early March and are still top of the table and this is the headline in your super, soar-away Sun:

A caption on an image of Mo Salah reads ‘Salah brings up his 100th Prem goal for the Reds but was guilty of missing a string of chances’.

Pesky fact: Salah had three shots and scored once at Brentford.

‘A string’ is an undetermined number but it sure as hell is not two.

The Sun’s Jordan Davies leans into the narrative, telling us ‘STRANGE things are beginning to happen in the top four’. Intriguing.

After detailing Bruno Fernandes’ penalty miss and Chelsea striker Romelu Lukaku being kept quiet by Manchester City, themselves surely in the ‘top four/flaw’ but that is not suiting the theme here so let’s hurry on past that small detail, Davies gets to Liverpool…

‘And Mohamed Salah was guilty of spurning sitter after sitter for Liverpool on Saturday to allow Brentford to fight their way back to a thrilling draw in West London.’

‘Spurning sitter after sitter’, you say? He literally had three shots. One was a goal, one was cleared off the line quite brilliantly by Brentford defender Kristoffer Ajer and the other was a miss. He spurned one ‘sitter’ at the absolute most. Does this really count as a ‘strange thing’ happening in the top four?

‘There is no need to call the Ghostbusters just yet, but something out of the ordinary looks to be possessing the big guns.’

The big guns that actually occupy the top four? Those big guns?

We might have more sympathy for Davies and this bizarre narrative if The Sun themselves had not illustrated this piece with a graphic detailing the number of points dropped by the big four after six games.

The only spooky thing here is The Sun’s frightening commitment to denigrate anything and everything Liverpool.

The Crooks of the matter
Mo Salah makes it into Garth Crooks’ team of the week on the BBC and he says: ‘I’m almost irritated by my own selection. By Salah’s standards, this was a poor performance from the Egyptian superstar.’

Which is weird because a combination of the media, fans and statistics made Salah the best Liverpool player on the pitch.

Hint hint
At the other end of the Liverpool propaganda scale you have the Liverpool Echo teasing us with Mo Salah transfer news on their live blog:

And what is this ‘Salah hint’?

Well, it turns out that Salah’s agent Ramy Abbas responded to a tweet about the Egyptian’s 100th Premier League goal for Liverpool which labelled him a ‘bonafide Anfield legend’ with one word:

He has basically signed that contract.

Reach for the stars
How the Mirror report that one-word tweet:

Crouching tiger, hidden dragon
Peter Crouch is taking on a straw man in the Daily Mail as he asks why Liverpool fans do not love Mo Salah.

Which Liverpool fans has he been consulting exactly because this is bordering on the utterly bizarre?

‘Compare him to Fernando Torres and Luis Suarez for a moment. They are almost held in higher esteem – and are deemed more special – by supporters. But he has a record that eclipses them easily.’

You think Liverpool fans prefer Torres – who famously left for Chelsea – to Salah, who has helped them win the Premier League and Champions League?

‘It is reaching the stage where you look at what he is doing and have to come to the conclusion that he is a modern-day great. Salah walks into the right-hand side of Liverpool’s best-ever XI. He has that position sewn up.

‘Get him in there alongside Gerrard, Souness, Rush, Dalglish — whoever you pick, he has to be included. When you think of the players who have worn that red shirt, Salah gets in the ultimate team. Suarez and Torres do not.’

As it happens, Liverpool fans voted for an ultimate Liverpool XI on the BBC website last July.

The percentages for Torres, Suarez and Salah? 11%, 32% and 31%. Since then, Salah has scored another 37 goals so Mediawatch is quite confident in thinking that the Egyptian will have overtaken Suarez to make that XI.

What we absolutely do know is that Torres is not ‘held in higher esteem’ than Salah among Liverpool fans.

Crouch then writes that ‘it might upset a few people’ but Salah should become Liverpool’s highest-paid player. Point us to the people it might ‘upset’, Crouchy. We will wait.

Sorry, what?
The opening like of Mike ‘wacky’ Walters’ Mirror report from Manchester City’s win at Chelsea is like an art installation.

‘Instead of a last tango in Paris on Tuesday night Bernardo Silva has rediscovered his mojo as Manchester City’s pocket Hercules.’