Home All The News Modric: Mourinho saved me from Tottenham ‘torture’ 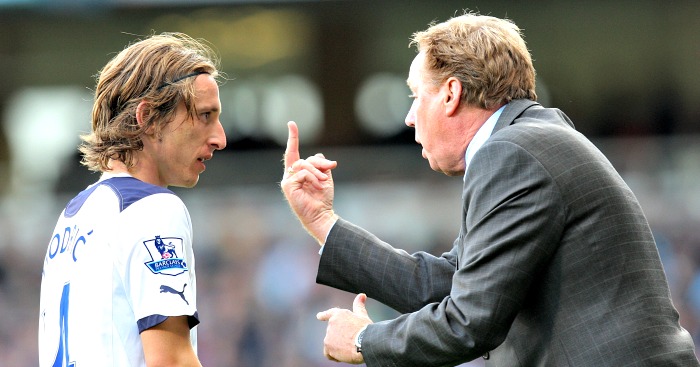 Luka Modric has revealed in his autobiography how Jose Mourinho was forced to intervene with Spurs chairman Daniel Levy over his move to Real Madrid.

Mourinho was in charde of Madrid when they signed the Croatia international for £30million from Tottenham in 2012.

Modric was desperate to leave the club after being unhappy a proposed move to Chelsea had been blocked by Levy the summer before, but the Spurs chief was again making life difficult.

In the end, Mourinho was forced to personally step in to end Modric’s “torture” at White Hart Lane.

The Portuguese manager now works alongside Levy, but Modric says the chairman was driving Mourinho “crazy” at the time.

“Those negotiations were tough,” the 34-year-old said in his autobiography ‘Luka Modric – My Autobiography’.

“Throughout my career, I had always been nothing but professional. But now, this seemed to be the only way to make Levy keep his promise.

“Whenever I reminded him, ‘Chairman, what about your promise?’, he would reply, ‘We’ll talk.’ Then he would always find an excuse to avoid the topic.

“My representatives kept me informed about everything. As did Jose Mourinho. Levy was driving them crazy: it seemed that every time they reached an agreement, he asked for something else.

“I was under a lot of stress, so were (wife) Vanja and the rest of my family. Twice my representatives called me, ‘Finally, we’ve agreed on everything, you’re flying to Madrid.’ And when, all happy, I would head for the airport, new information would arrive, ‘We have to put it off, there’s a new development’.

“The second time that happened, I was on the edge. Falling apart. Tortured by the lack of progress, I remember asking Vanja, ‘How can Levy be so unfair?’.

“Vanja and I concluded that the torture would continue for a while.

“During this long period of negotiating, going back and forth, there were several times I got scared that Real might withdraw.

“The very idea made me nervous. Mourinho played a vital role; he was determined to bring me to Real, insisting on the transfer even when the Real officials lost their patience with Levy.

“Mourinho himself called the Tottenham chairman and tried to persuade him to accept the offer, ‘otherwise Real could back out of it.’”

Modric, who made 159 appearances for Spurs across four seasons, admits he “resented” Levy for blocking moves away, but that he has been a great chairman for the club.

“Despite all the turbulence in the summer of 2011 and what followed later, I always had a good relationship with Daniel Levy,” he revealed.

“First and foremost, he was the one who brought me to Tottenham – for a record fee in the club’s history. That only showed how highly both he and the club thought of me.

“They gave me a big chance. My status at White Hart Lane was excellent, and I think I earned it with my behaviour, performances and by always giving my best for Spurs.

“Generally speaking, Daniel Levy is an excellent chairman who fights for Spurs interests. The club’s recent results only attest to this.

“However, I resented him because on a couple of occasions he had promised to let me move to a bigger club and then broke his promise. For me, one’s promise and one’s word are more important than anything in the club’s or the player’s best interest.”