Home All The News Molde 0-3 Arsenal: Gunners through to next round as Pepe scores 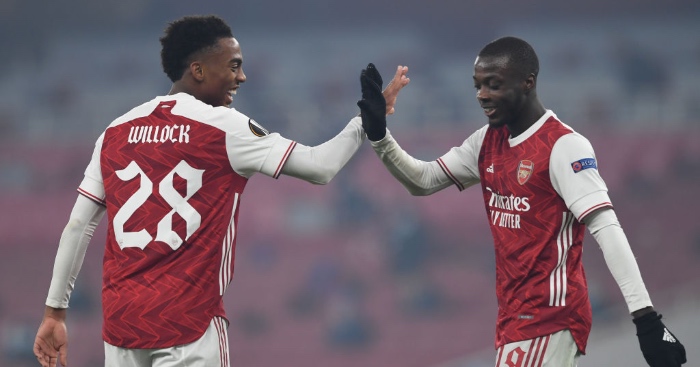 Nicolas Pepe showed the positive side of his game as he bounced back by scoring the opener to help Arsenal win in Molde and secure qualification to the Europa League knockout stages.

The Ivory Coast winger kept his place in Arsenal’s side despite being criticised by manager Mikel Arteta following his red card in the goalless draw at Leeds on Sunday.

Fast-forward four days and the club-record signing made amends by shining as the Gunners won 3-0 in Norway with teenage forward Folarin Balogun grabbing his first senior goal after Reiss Nelson had doubled the lead.

The result means Arsenal are through to the round of 32 and can assure themselves top spot in Group B with a positive result at home to Rapid Vienna next week – a game which will see 2,000 supporters return to the Emirates Stadium for the first time in nine months.

Nelson had a decent early chance only to see his strike well saved but it was the hosts who were then scratching their heads as to how they passed up a fine opportunity to take the lead.

Defender Sheriff Sinyan only needed to turn in a cross when free at the back post but managed to divert it across goal and into the grateful hands of Alex Runarsson.

Pepe had looked lively from the off and fired wide after running at the Molde defence as the sides went in level at the interval.

Arsenal lost David Luiz to injury at the break, the Brazilian replaced in defence by Rob Holding – but it was at the other end of the pitch were Arsenal looked much sharper.

A superb Pepe strike cannoned back off the crossbar as the Gunners came closer and closer to taking the lead.

Moments later the 25-year-old opened the scoring, controlling a cross at the back post and curling a strike out of the reach of Andreas Linde.

Eddie Nketiah then bundled in from close range but was flagged offside before Nelson popped up six yards out to steer home Joe Willock’s cross and put Arsenal further clear.

Arteta rotated his pack by introducing Kieran Tierney and Emile Smith Rowe off the bench, giving Willock and the ineffectual Alexandre Lacazette a rest.

But it was Molde substitute Mathis Bolly who almost halved the deficit at the other end, bending a fine effort inches over the bar with Runarsson seemingly beaten.

The win would be wrapped up by Balogun, the 19-year-old scoring his first Arsenal goal just 37 seconds into his second senior appearance as Linde failed to deal with his strike from Smith Rowe’s pass.

The goal was the cherry on the cake for Arsenal, who have made it through to the knockout rounds of the Europa League for the fourth season in a row.