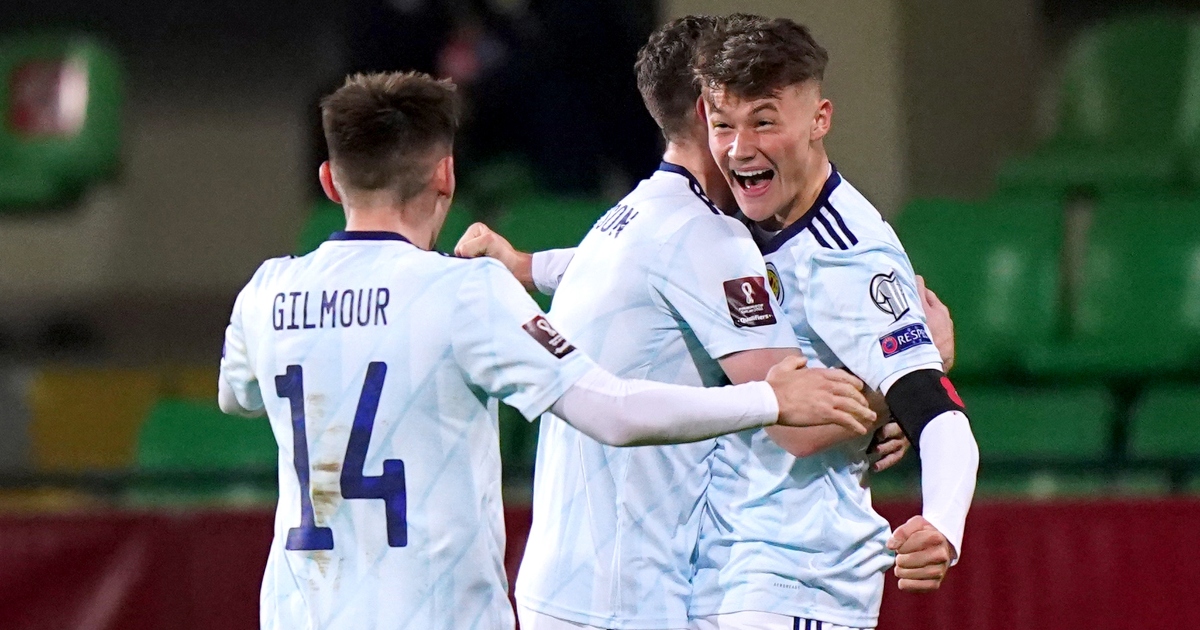 Scotland have secured a World Cup qualifying play-off spot thanks to a 2-0 win against Moldova in Chisinau on Friday evening.

Nathan Patterson scored his first international goal to make it 1-0, before setting up the second for Che Adams as the Tartan Army secured second-place spot in Group F with a game to spare.

Adams also had two goals disallowed as Scotland delivered a positive performance in front of a noisy travelling support in Chisinau to record a fifth consecutive win.

Ranking the England Euros hangovers, from fresh to f***ed…

The three points saw them open up an unassailable lead over third-placed Israel ahead of their nearest challengers’ game in Austria, and took the pressure off ahead of the final group game against group winners Denmark.

After a lively opening, Rangers right-back Patterson drilled home the opener in the 38th minute after running on to John McGinn’s lay-off.

The 20-year-old latched on to McGinn’s backheel in the 65th minute before sending in a low cross which Adams knocked home from close range.

Patterson continued to have an eventful evening as his handball gifted Moldova an unlikely lifeline but Craig Gordon brilliantly saved an 82nd-minute penalty.

Scotland arrived in Moldova without five players who started their previous win, a last-gasp triumph against the Faroe Islands.

Armstrong and McGinn were employed in advanced midfield roles either side of lone striker Adams and Scotland attacked from the start. Adams had the ball in the net inside three minutes but was marginally offside when Andy Robertson sent in a low cross which McGinn mis-kicked.

Gordon saved from Moldova captain Artur Ionita after the hosts pressed the Scots into an error deep in their half but Scotland were generally sweeping forward in numbers. Armstrong and Billy Gilmour forced saves before Robertson was also denied after bursting past a defender.

Adams might have done better with a couple of half-chances from distance either side of a wonderful Gordon stop from Ionita’s header.

The opener came after a bit of a lull. Patterson immediately sensed the opportunity after Gilmour had played the ball forward to McGinn and his left-footed finish was emphatic.

The vast majority of the second period was played in the Moldova half. Adams passed up an early chance after McGinn’s cross but was in the right place to finish following Patterson’s drilled cross.

Scotland looked for a third and Cooper had a header cleared off the line before Adams was foiled by a more obvious offside decision.

Gilmour also threatened before Patterson’s arm made contact with the ball as he challenged for a high ball. Gordon made a superb diving save from Vadim Rata which was matched by Kieran Tierney’s sliding challenge to prevent the penalty-taker making amends.

McGinn forced a save at the other end before Stoke striker Jacob Brown was handed a late debut.

Scotland now host Denmark on Monday at a sold-out Hampden with an opportunity to boost their chances of sealing a home semi-final in March.