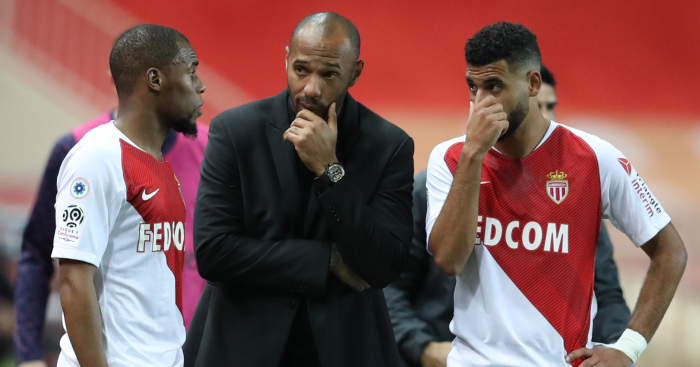 Thierry Henry “would make examples of people” as Monaco manager.

Henry was suspended from his duties as Monaco manager on Thursday pending a final decision on his future.

The club are second from bottom in Ligue Un, with Henry winning just four of his 20 matches in charge since being appointed in October.

Just hours before Henry’s suspension, the 41-year-old held a press conference stating that he had culled much of an under-performing first-team squad.

Breaking | AS Monaco manager Thierry Henry announces that he has banished “too many to name” individuals from the 1st team to the reserves in a cull against “players who are only thinking about their own futures” in a bid to turn around the club’s situation.

“There were not many people at training yesterday, he said. “We will see today. We must react at Dijon.

“We are in a critical situation, sadly, that has not changed. We have cut the squad down to size. At one point or another, you need guys who want to save the club, not just think about their own futures. We have done some sorting.

Goal France has run a feature on precisely where it has all gone wrong for Henry in his first ever managerial post.

The article states that a number of Monaco players had gone to the board to complain about how the Frenchman was treating them, with one anonymous squad member quoted as saying: “A few matches ago, he screamed: ‘He, he is supposed to be worth €10m?’

“All of the substitutes heard. The message he sent to the players was very negative.”

Another source added: “He would speak badly to the players, it is a fact.

“He would also make examples of people and that annoyed a lot of people, he gave this haughty impression as if he would not consider anyone else’s opinion.”

Look at Thierry Henry’s death stare to Monaco youngstar Badiashile after he didn’t tuck his chair in when press conference finished. Your legend could never. 😂 pic.twitter.com/3CPQTcvuj6