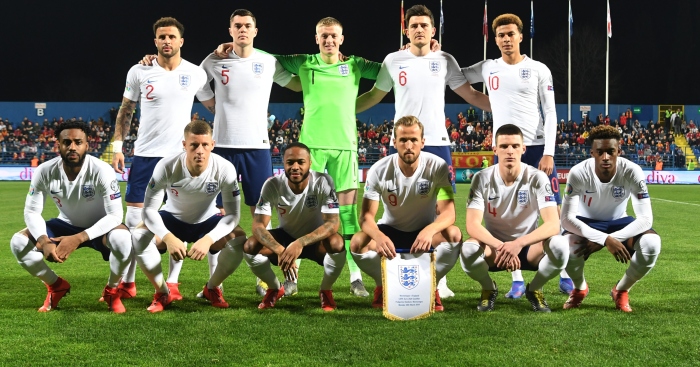 JORDAN PICKFORD
Hadn’t dirtied the latex on his gloves prior to retrieving the ball from his net, though there was little the Everton keeper could have done to deny Marko Vesovic, especially once Harry Maguire stepped across his line of vision and presented the Montenegro forward with a lane down which to pass the ball into the far corner. The Everton keeper fielded everything else with an encouraging minimum of fuss, including one 35-yard dipper late in the first half which was made to look a simpler catch than it perhaps was.

KYLE WALKER
Began to look a little flustered over the lack of protection Callum Hudson-Odoi was offering while Ross Barkley went off foraging for space, but once Gareth Southgate switched his wingers – with Raheem Sterling ahead of him – Walker looked immediately at ease. The Manchester City defender needed a solid performance given the competition for his place and the right-back will reflect with satisfaction.

DANNY ROSE
Perhaps given the nod over Ben Chilwell because of his experience and the Tottenham defender – no longer first choice for club or country – appeared determined to offer a steadying, uncharacteristically cautious presence as the only defensive change. Despite taking 127 touches, we are hard pushed to remember any, other than the occasion Rose gave away possession in his own box on the opposite flank, which did not cost England as it might have. He collected a needless late caution but given the tone of the atmosphere around him, Rose can be forgiven for taking it out on an opponent.

HARRY MAGUIRE
The Leicester defender enjoyed proving the Czech Republic coach wrong last Friday and he gave a similarly solid performance here. Perhaps Maguire was caught too far from Keane when Montenegro switched play prior to their goal and in his haste to make up the ground, the centre-back strayed beyond the position necessary to block off the angle inside the far post which would have given Vesovic only a view of Pickford rather than the corner of the net. Otherwise flawless as the most senior of the central defenders.

MICHAEL KEANE
Netted his first international goal, which was handy since the Everton defender was the most obvious, if also the most helpless, culprit in England having to seek an equaliser. Keane failed to clear convincingly before then having the ball put through his legs by Vesovic on his way to the opener. It was an unfortunate rebound and the lack of cover did not help, so with the leveller – a fine header from six yards – we’ll call it even after two encouraging displays proved he can be an adequate stand-in for John Stones.

DECLAN RICE
The West Ham midfielder didn’t leave his post as Maguire and Keane’s shield on his first England start and with Rice on patrol, the centre-backs were rarely bothered after the opening quarter of an hour. One second-half slip which threatened to offer Montenegro a counter-attack with numbers up was immediately rectified by a tackle so perfect, it made you wonder if giving the ball away was all part of the plan to draw the hosts out. Eric Dier has a battle on his hands.

ROSS BARKLEY
Southgate was most impressed with Barkley’s drive from deep during the win over the Czech Republic but this was always going to be a different test for the Chelsea midfielder. Barkley recognised the need to adapt and earned a second man of the match award in four days as a consequence.

The 25-year-old played a major role in the first four goals, adding some tangible weight to the subjective consensus that Barkley was the most effective operator on the field. His brace came from well-timed jaunts into the box, with Montenegro either incapable or refusing to track England’s most dangerous runner. Two first-time finishes demonstrated his composure, while his assist for the equaliser and his slide-rule pass for Sterling to set up Kane exhibited the creative traits Maurizio Sarri has failed so far to unlock.

The difference? Southgate’s system is by no means as rigid as Sarri’s, with Barkley able to drift across the line rather than being anchored to the left. That freedom allows the midfielder to find the pockets of space which on Friday came in deeper areas. In Montenegro, Rice’s presence gave Barkley licence to roam and get on the ball in tighter areas, but the former Everton star showed he possesses the subtlety to thrive in such a role.

Where does he go from here? Back to the Chelsea bench, probably, either from the start at Cardiff on Sunday or between the 60th and 70th minutes. For England, though, the starting role is his to lose.

It was two years ago this week Ross Barkley felt his England career was never going to take off, having not played a minute against Lithuania and Germany. This is best night by a distance and there will be more to come. 🔵

DELE ALLI
The Tottenham attacker impressed at Wembley on Friday in only his second game in 61 days but those exertions seemed to catch up with him in Montenegro. Perhaps Alli took one for the team, because he was certainly more conservative in his movement, sticking primarily to the left while Barkley went wherever he fancied. Alli also refused the temptation to drift wide into space, leaving the flank free for Hudson-Odoi, and with little room to operate, the No.10 was suffocated. Upon the first change, it was no surprise to see Alli’s number up but in the circumstances, the change and the dip in performance were easy to fathom.

CALLUM HUDSON-ODOI
The Chelsea winger became the second-youngest player to start a competitive international and the first player since Steve Bull to start for England without yet having being selected in a top-flight XI. So, at 18, naivety is inevitable. Hudson-Odoi showed that early on, most notably when Montenegro opened the scoring. The teenager failed to make himself even an inconvenience when caught underneath a long switch of play and he failed to react quickly enough to the loose ball immediately after. After further frustrating Walker, Hudson-Odoi was switched with Sterling to the left, and everything changed. He was allowed time and space to run at the Montenegro right-back and given the opportunity to do what he enjoys most: driving at retreating defences.

Hudson-Odoi’s lack of exposure in the Chelsea XI was no excuse for Montenegro failing to suss the threat in time. Filip Stojkovic seemed happy for his direct opponent to drift inside despite little cover being provided by his team-mates. Hudson-Odoi strolled beyond two defenders with little more than the tiniest of shoulder drops to set up Barkley for England’s second, and the same routine almost saw the youngster open the second half with his first international goal.

Now for a Premier League start and a regular game at club level. Wherever that may be.

RAHEEM STERLING
The primary talking point around Sterling will be around his celebration in front of the Montenegro fans. You could say he should make his point with the ball, but having already done that, does anyone really begrudge him the chance to ram it home? Not us. Go ‘ed, lad.

After his hat-trick on Friday, this was another step forward for the Manchester City star, which is quite something when you consider the strides he has already made. A fourth goal in two games, nutmegging the keeper while one-on-one, and two further assists, demonstrate the clinical consistency he now possesses. His guile set up Barkley for his second before Sterling’s pace and, crucially, composure with his pass teed-up Kane for the fourth.

He is the hero we all need right now.

7 – Raheem Sterling has had a hand in seven goals in his last four England games (6 goals, 1 assist), as many as in his previous 31 apps. Electric. pic.twitter.com/ksaqy4W5j0

HARRY KANE
Montenegro’s plot to box the England captain worked in so much that it restricted his involvement to just 24 touches and one shot. Of course, Kane scored from that solitary effort on goal, and while the home defence were guarding against the centre-forward, Sterling and Hudson-Odoi sneaked in while their backs were turned. His trickiest task was holding his run to stay level with Sterling for the winger to tee-up Kane for his 17th goal in 20 appearances under Southgate.

JORDAN HENDERSON (for Dele Alli, 63 minutes)
Coming on at 3-1 up, the presumption was that Henderson would sit tight and direct England’s ‘game management’ protocols with an abundance of pointing and shouting. But with Rice sitting on Maguire and Keane’s toes, Henderson could afford to leave the dirty work to someone else and enjoy himself on his 50th cap. The Liverpool midfielder won possession with a perfectly-timed toe-in to set England away for their fourth, before his slide-rule split pass put Sterling in for the final goal. Rounded off the evening with a booking for some needless but enjoyable argy-bargy.  More please.

JAMES WARD-PROWSE (for Barkley, 81 minutes)
A late appearance for his second cap should serve as further incentive for the Saints midfielder to continue his recent impressive form since regaining his club place. Touched the ball 14 times, so we’re told.

CALLUM WILSON (for Kane, 83 minutes)
Came off the bench with seven minutes to play to collect his second cap. Which was nice.