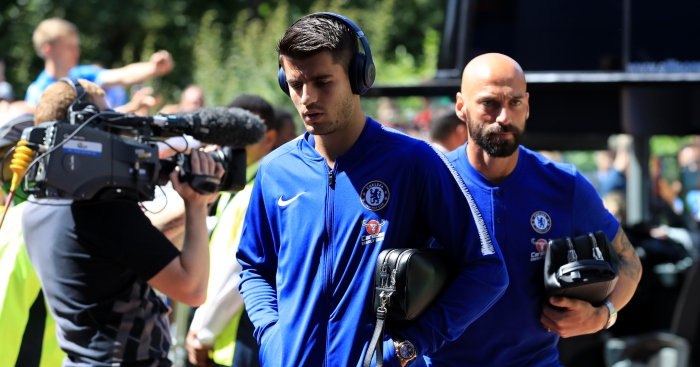 Alvaro Morata claims signing for Atletico Madrid on loan was the “best thing” and has revealed all his troubles at Chelsea.

Morata was signed by Chelsea as Diego Costa’s replacement, but the 26-year-old ended up following Costa to the Wanda Metropolitano on an 18-month loan deal.

The Spain striker moved to Stamford Bridge on a five-year deal in July 2017 in a £60million move from Real Madrid, but he was a member of Atletico’s academy.

Morata cut a forlorn figure during most of his time at Chelsea and he told Maurizio Sarri of his desire to leave in December last year.

He will have two years left on his Chelsea deal by the end of the 2019-20 season, when the loan ends, but it is unlikely he will play for Chelsea again.

“I had lost confidence in myself previously,” Morata told Goal.”I was very upset by the opinion of the people in England. I think they caught me in the middle of everything.

“I didn’t quite feel loved or appreciated by the club or the fans. I started very well at Chelsea, but an injury in the end leaves you a bit stuck.

“As bad as it was, I still scored 15 goals and won the FA Cup… but I was out of the World Cup, and for me that was the hardest thing that could happen to me in my life.

“Now, signing for Atletico has been the best thing that could happen to me in my life.

“I had a very bad time in London. In the end I was training alone. I talked to Maurizio Sarri and he told me some things that I knew were not going to be as he had said. I was very nervous. My wife was in shock with me.

“I already knew that I could sign for Atletico if everything went well, and they had four games previously [before Morata officially signed for them on January 29]. I saw them all at home with my wife and she was amazed!

“She does not like football very much, and she did not understand how I could get like this, so crazy, watching Atletico games, screeching at home, nervous, when I was not an Atletico player yet.

“It’s a story I’d like to tell very slowly in the future. I went from being tied on the same amount of goals as [Mohamed] Salah and [Harry] Kane at the start of the first year, and people made a song about me, I could not even go out in London!

“And one day I get up with a shooting pain in my back, my level goes down, and they start telling me everything [referring to criticism about him] in England.

“You are supposed to be respected by fans, but you know…”