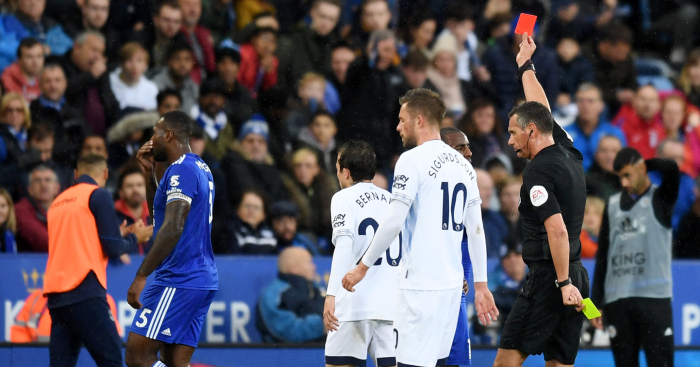 Leicester captain Wes Morgan has called for a review of refereeing after his second red card of the season.

The defender has questioned the consistency of officials this season following his dismissal in Saturday’s 2-1 defeat to Everton.

Morgan collected two yellow cards for fouls on Richarlison, walking in the 63rd minute, to add to his sending-off in the 4-2 defeat at Bournemouth last month.

He was unhappy with referee Andre Marriner on Saturday but also criticised the standard of officiating this season.

“Maybe the game is changing so you can’t even have any contact whatsoever,” Morgan said.

“It does feel like any challenge you make, the referee is having a word. Even though you might win the ball, it’s looked on as a challenge that might warrant a yellow card.

“I think there’s definitely some inconsistency with referees and the decisions they make so maybe a review is needed.

“I tried to speak to the referee throughout the game, trying to reason with him and trying to balance it out.

“We were getting free-kicks awarded against us for challenges the referee said were from behind but we’d won the ball.

“That doesn’t make sense but sometimes you speak to the referee and he just keeps on giving the same things.”

Morgan was troubled by Richarlison all game but felt the Brazil international, who scored Everton’s seventh-minute opener, made a meal of their second challenge.

And the Leicester skipper claims strikers are getting away with too much.

“I think the referees just have to be more coy about it,” he said.

“The referee made his decision off the reaction of the player. It should have been a free-kick at the most but it’s one of those things.

“You can see from the players’ point of view if a challenge is a free-kick or not and, if the players are going down screaming, the referees shouldn’t buy into that.

“It’s disappointing because some referees do. I think that’s a grey area that needs clearing up.”