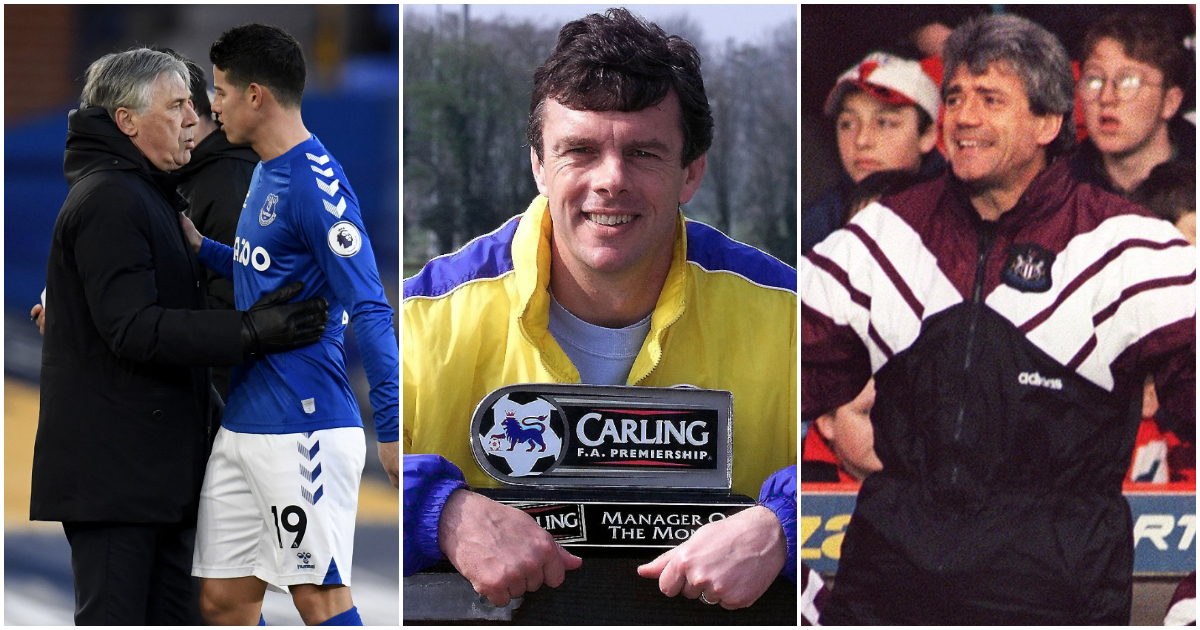 We dug this old feature out of our big old bucket of old ideas last year when Spurs inexplicably found themselves top of the pile so it would be rude not to do so again now history has repeated. By the time anyone gets the chance to topple them this time they will have ensured that basically half their total time ever spent in top spot has been in the last 12 months. But who else has tasted life at the top without actually claiming the big prize?

It’s faintly ludicrous really for ever-presents who have at various points been quite good, but Everton had only been top of the Premier League table for eight days before last season. After sitting at the summit for barely a week in nearly three decades, they decadently took top spot for almost the whole of October 2020 in what really did look for an all-too-brief while like it could be a genuine and joyous tilt at something extraordinary. It, er, wasn’t. But still. What times we all had. We shall always have October 2020.

Madder even than Everton’s all-too-brief dalliances with top spot has been the revelation that the six days West Ham have just spent at the summit represented 86% of their entire time atop the Premier League table. Before now they had been there for a solitary Tuesday night in August 2006 after a 1-1 draw at Watford took them to four points from two games while pretty much everyone else had only played once. This also means that for a glorious 10-day period between August 13 and August 23 this year, West Ham had spent precisely as long at the top of the Premier League as Brentford. Probably what spurred them on.

Look at them, back on top of the league and doing it with a trio of Jose Mourinho tribute act 1-0 wins. They have been really quite lucky, as anyone who has won three games 1-0 will tend to have been, and there are still probably more reasons to expect it to go very wrong than very right from here – not least what happened after they spent a good chunk of November and December last year gallivanting at the top of the table only to crash wildly and dramatically to earth/seventh.

But the facts are these. They are the only team with a 100% record after three games of the season, and given the first of those was against Manchester City it would be wrong to attribute it entirely to a kindly fixture list. There is clearly a plan there and neither Eric Dier nor Davinson Sanchez looks like the uncoachable liability a certain other Portuguese (and certain football website) thought they were.

They’re also going to be here for a while, having craftily timed this latest sojourn at the summit to coincide with an international break. So that’s another 12 days guaranteed, and another 1-0 win over Palace upon their return to action would secure another seven days for Nuno’s marvels.

These next 13 days are also going to be the first ever in the Premier League to combine Spurs being top with Arsenal at the foot of the table. A fun fortnight for Gunners, who can at least reassure themselves that, while their own terrible form may well last a bit longer, at least Spurs’ good form almost certainly won’t.

The first club to end a day top of the Premier League table courtesy of anything other than alphabetical order (philosophical questions: do Arsenal get credit for all the days in all the off-seasons? And what of AFC Bournemouth and their cheeky Acme-style scam to try and jump the list?) was Mike Walker’s Norwich City. Tipped by many as relegation candidates in 1992, the Canaries stunned Arsenal to win 4-2 on the inaugural league’s opening day. With Coventry beating Middlesbrough, Leeds overcoming Wimbledon and Sheffield United shocking Manchester United all by one goal, Norwich climbed straight to the summit.

They were expected to fall quickly and sharply, yet did no such thing. Chelsea were beaten next at Carrow Road as Norwich proceeded to win 12 of their first 18 league games, ending the calendar year top with a goal difference of zero and a three-point gap over Manchester United and Aston Villa in second and third place respectively.

Both sides leapfrogged Norwich by the first game of 1993, and although they clawed back their advantage by the end of the month with consecutive wins over Crystal Palace and Everton, United would soon assert their dominance. The Canaries had flown so close to the sun, but have been locked in their cages since. We’re going to stick our necks right out and say the Canaries will not be adding to their tally this season after starting the season with three defeats from a horrible fixture list.

Don’t get us wrong; they may well overhaul the current nine-point gap to Spurs, but it’ll probably be for 11th spot by the time they get there.

One of the best teams never to win a trophy came ever so close in those halcyon days under David O’Leary. Leeds never finished lower than 5th from 1997/98 to 2001/02, reaching the FA Cup quarter-final and two European semi-finals in that time. They famously ended the millennium as the Premier League leaders, sitting one point clear of Manchester United as the year 2000 beckoned.

Leeds had been top even before O’Leary’s appointment in 1998. Their first spell on the throne was brief, with three straight wins to open the season under Howard Wilkinson in 1995/96 seeing them go top for just over a week. They then went top for a full day after beating Southampton in O’Leary’s fourth game in charge. Have done lots of fun things since returning to the Premier League last season, but topping the table is not one of them. Yet. Let’s rule nothing out.

The aforementioned tussle with Norwich gave Aston Villa the unlikely taste of a Premier League title race that they managed to sate throughout the years. The Villans topped the table after an opening-day thrashing of QPR in August 1993, ended 1998 with a two-point gap over second-placed Chelsea, then climbed to first again in late 1999, when they opened that season with victories over Newcastle and Everton. John Gregory could not quite keep that pace however, and they soon fell away. Villa have been as high as second in 2014 and third in 2015 since without ever going top this century.

It is almost impressive to spend five days short of an entire year at the top of the Premier League without ever actually winning it. Newcastle have been top of the Premier League for almost 200 days longer than any other non-champ, a longer total time than two winners (Blackburn, 238 days, and Leicester, 187 days), as well as being at the summit over two-and-a-half times as long as Tottenham (59 days), Bolton (38 days), Everton (38 days) and West Ham (7 days) combined.

It all started with Kevin Keegan’s infamous title races – and collapses – but the baton was gamely picked up by Sir Bobby Robson, and even Sam Allardyce at the start of the 2007/08 season. Oh, those heady early days under Mike Ashley’s ownership.